On November 8-9, 2013 I ran the Ragnar Relay Las Vegas as part of the team My Little Ponies and Holy cow… what an awesome experience! I seriously had so much fun!

First, I was extremely worried about this. I was nervous because I was supposed to be running 17.3 miles total and that’s the furthest I’ve run in a 24-hour period since the Las Vegas RnR in December 2011! And even though the distance was broken up into 3 legs, that almost made it a little more intimidating because I knew that after running I’d have to hop in a van and head to our next exchange! The other reason for nerves was this was the first time I’ve been away from my daughter overnight since she was born. (she’s 14-months-old) It’s not like I was leaving her anywhere weird, she stayed at home with her Daddy… but I was still nervous!

I was in van 2, so my half of our team didn’t start our legs until the afternoon on Friday, November 8. In a Ragnar Relay there are “major exchanges” which are points where one van ends their set of legs and the next van picks up the relay. So the first major exchange was major exchange 6, that’s where my van would start our runs. Major exchange 6 was very close to my house. So it was kind of nice to know the part of town where we were starting out! It was pretty warm as we wandered around the major exchange and listening to our safety briefing (which didn’t really give me a lot of info, since I could barely hear the girl talking. But it’s part of the procedure and I respect Ragnar’s needs to push the message.) but fortunately the sun was on its way down then too.

During the “night hours” of the race all runners are expected to have on a reflective vest, carry a flashlight or wear a headlamp and have a blinky light on their back somewhere. All team members in the van have to wear a reflective vest anytime they are out of the van during the night hours. For the Vegas race… night hours were 3:45 pm until 6:30 am. Since my first leg started around 3:30, that meant that 2 of my 3 legs were during “night hours” and I had to wear the requisite gear. Although, it was never dark enough to need the lights during my first leg, I do imagine the reflective vest was a good idea as it was early dusk when I finished.

After Chris (our van’s first runner) started his first leg we piled into the van and drove to the next exchange so I could run. I was jittery, excited, happy, nervous, etc. Basically a whole range of emotions. So we had to get the “my first leg of my first relay” photo! 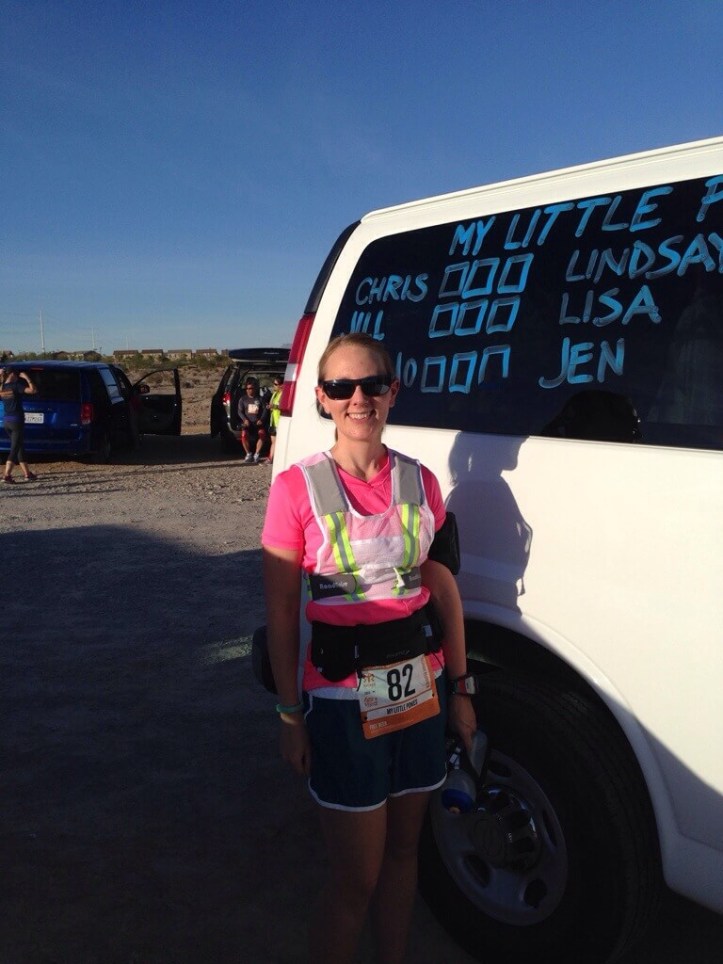 For the first leg I wore/used:

The 6+ miles felt amazing, the weather cooled down and I just felt fluid and smooth. I did get held up at a highway crossing for about 5 minutes, which was kind of a bummer. And I did have to stop at several stoplights, but I didn’t care that much. But at one of them, a man was pretty grumpy about stopping. He kept muttering, “This is ridiculous. Stoplights. They should do something about this. Ridiculous.” Ummm… did he honestly think the city would shut down 187 miles of road for this race?

I passed off the slap bracelet (instead of a baton) to the next runner on my team and hopped in the van quickly, since the next runner had a leg that was 2.x miles and we had to drive to the next exchange to be ready! That continued for a few more times until we hit the next major exchange so van 1 could take over again. When we hit that we had a 3.5 hour break or so before our runs started up again. We stopped and ate at Panera. I wish the serving of chicken noodle soup was bigger, because that really tasted good to me at that point!

The middle of the night major exchange for our van to begin running again was very crowded and hard to navigate. Chris had 5.x miles to go before I ran again, I had a 3.1 mile leg this time. It was not nearly as difficult to run at midnight as I thought it might have been. In fact, I loved it. The weather felt nice and cool, no sun beating down on me, my run was all slightly downhill… it was a really good leg. Except for the man I passed who sounded like he was giving birth. He ran while making these horrible moaning sounds.  But at least he added to my kill total! (Every runner you pass counts as one of your “kills” and many teams keep tally on the windows of their vans of how many kills they had.)

After this leg I got back in the van, rode along for the next 3 runners legs before I conked out. I got about 3 hours of sleep while laying in our van as our last runner did her leg and when van 1 took over again.

By the next morning, our team was a little off from our projected times and I realized I would be starting my leg about an hour after I had originally thought I was going to run. My last leg was the one I was the most worried about. It was all uphill and was my longest leg. 7.6 miles seems a lot more intimidating when you’re tired and have already run 9+ miles! Plus at that point, I wasn’t really feeling like eating much.

Around 9:30 am Chris passed off the baton-slap bracelet to me for the final time. I started out on my run, that took place entirely on the River Mountains Loop Trail. No traffic to contend with… but also no shade. And no water stations. And hardly any breeze. Much of my leg looked like this: 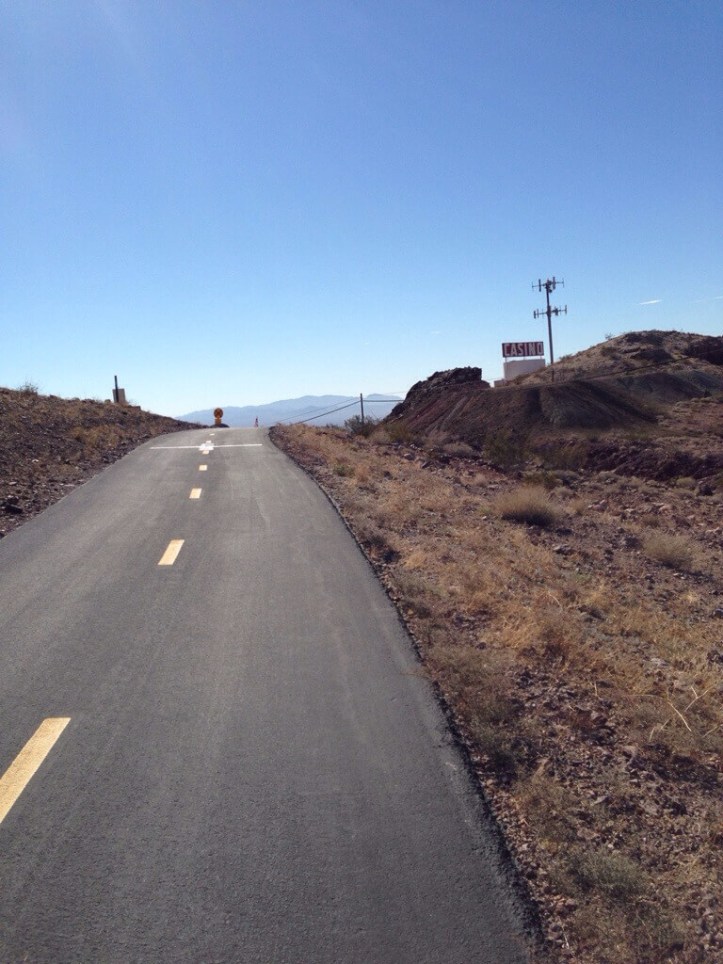 After a while, I started to walk up some of the hills and ran all the down/flats. It was just too warm and I was beginning to closely ration my water to make sure I had enough to get me to the end. This sign was a very welcome sight because it meant that I was nearly done and I could gulp the last of my water finally!

I didn’t get to check my final check box off until a little bit later because I had to get in the van as fast as possible so we could get to the next exchange, which was only a little over 2 miles away. Fortunately Lisa had a bottle of water for me so when I went through the exchange chute I could immediately chug something cold!

The day got warmer and warmer, we fell a little bit further and further off our projected finish time and we ran up and up and up hills. But team My Little Ponies conquered the Ragnar Relay Las Vegas in a little over 29 hours! 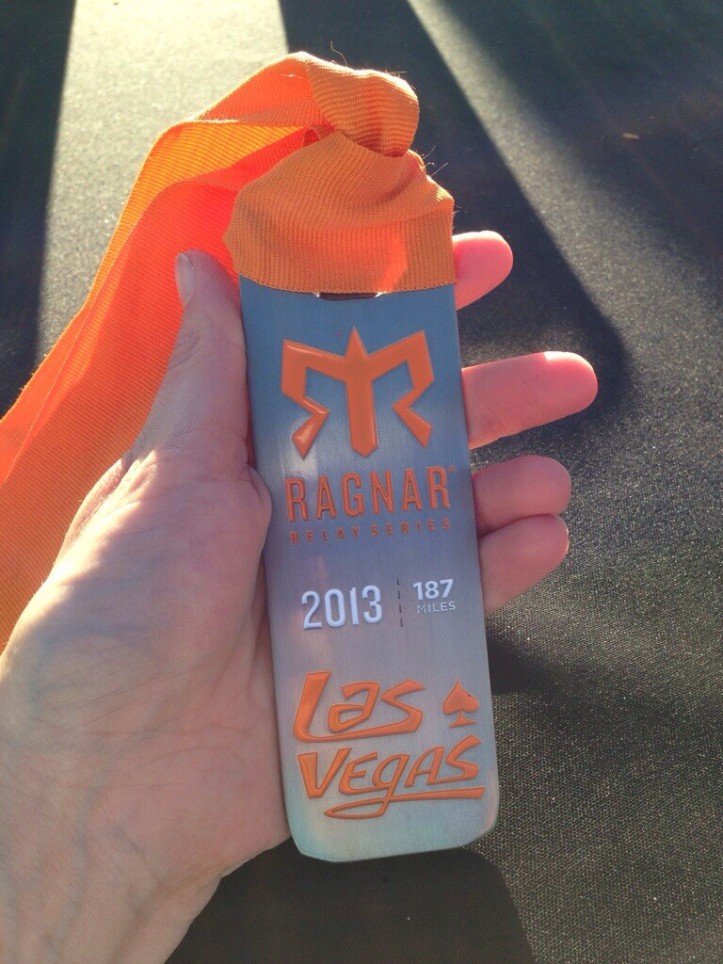 Daddy and baby had a nice time together… but it may take my husband longer to recover from the effort than my recovery! (Who, by the way just woke up from her nap so I must go get her!)