Saturday I ran a 10K… for some reason it feels like every single race this year has just snuck up on me. “Oh, an email telling me I have a packet pickup tomorrow. Okay, I’ll do that.”

Well, maybe this one wasn’t THAT sneaky because I did prepare for it some. Not like I was training for a 10K specifically in my running, but I was semi-prepared to run in costume. My friend runs the online shop Pixie Power and designs cute shirts; when she announced a Halloween one several months back I bought it with this race in mind. I would like to have multiple races to wear it in, but the only other races I can find are right on Halloween morning and we will need to be spending as much time carving pumpkins that day as possible. Family time trumps multiple races.

My kid woke up early that day… about 30 minutes before my alarm was scheduled to go off. And she wouldn’t go back to sleep. So I was spending a lot of my morning in my pajamas trying to engage in “quiet play” with her for about an hour and a half,  since it was early. My husband came downstairs about 15 minutes before I needed to leave for the race. I quickly ran upstairs, got dressed and raced out the door. I forgot to take a handheld water bottle, which I normally do for a 10K. That would have given me a chance to drink a little more… I started the race thirsty and eager for the aid station.

There were a ton of people in costumes and I gotta give people credit for running in some crazy getups. One woman came up to me and asked me to write my name or my alter-ego on a nametag. She was running as an identity crisis. So I wrote “Skeleton Mommy Jill” since my daughter had told me before I left that I was a skeleton Mommy.

The race itself felt harder than it should have… my heart was racing right off the bat and I was thirsty. The course was a loop and if you were doing the 10K you did the loop twice. So I got to pass the aid station twice! I was so happy to see it, just past the 1 mile mark. I really wish the cups had been filled more… most of the time you don’t want the cups too full at a race because you would pour it all over yourself. This race I would have gladly accepted a giant cup of water.

There were a lot of families participating in the 5K, so they were getting lapped by the 10K runners. It made for some fun dodging as they walked 4-5 abreast, but most of the course was on fairly wide open trails so it was easy enough to go around. 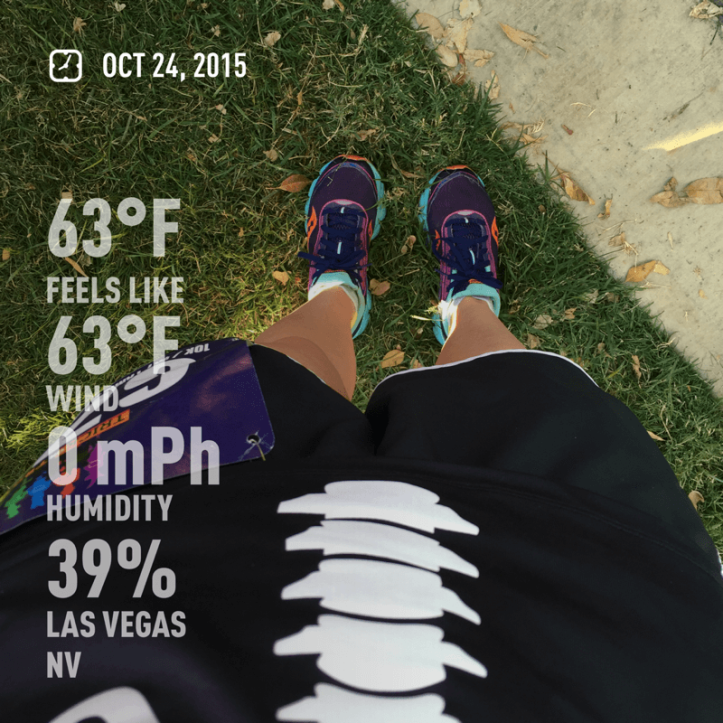 The start/finish area was another story though… it was a VERY narrow start. There was a woman in front of me at the start, she started to run when they told us to GO! and then immediately started to walk after she crossed the start line. I love events that get a large turnout of all abilities, but there needs to be the etiquette reminders. If you’re walking the race, don’t position yourself at the front for the start!

Since it was a loop course, you ran through that same narrow place midrace and for the finish. I was kicking at the finish to cross the line… and there were people leisurely walking in for their 5K finish or just milling about on the course. I guess it was an obstacle course in disguise! 🙂 I was beat and happy to be finished. I think my time was 58:xx… I could look it up, but I don’t care. I know my watch said 59:xx when I remembered to stop it. I had my sights set on the water at the finish line! 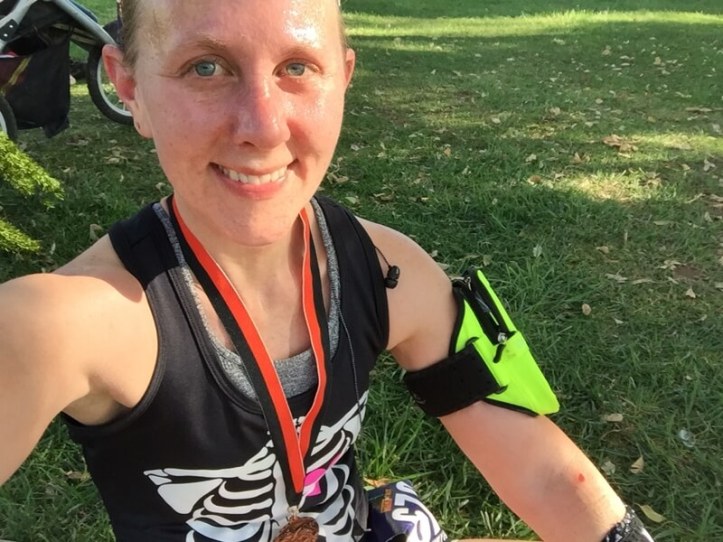 My awesome skeleton arm warmers rubbed a lovely little chafe wound into my skin. I didn’t notice from pain or anything, just when I sat down to chug my water and eat my KIND bar, I went to pull the sleeves down and noticed the hole. My daughter was fairly upset when she saw it and insisted on putting a band-aid on it for me. She did a great job of opening the band-aid herself… and then putting the sticky part right on top of the wound.

The organizers do a great job of decorating the park for the event. The whole thing is a fundraising event for Eagle Quest, a foster care organization. In addition to the race, they have vendor tables and a whole family festival associated with the event. So after I finished I told my husband to bring the kiddo over to play.

We paid the $5 fee so #AwesomeA could play games. She did a bean bag throw, ring toss, Plinko, etc. And at each game she got 2-5 pieces of candy. And they had donuts for the kids too. This kid was hopped up on sugar!

It’s a great event… if you’re a Vegas local I really recommend it because they do such a nice job with everything. If you’re visiting Las Vegas at the time, I recommend you check it out. It’s way far from all the touristy stuff… but visiting Floyd Lamb State Park is a great way to realize there is more to Vegas than what you associate as Vegas.

This year I’ve had a real problem where the days leading up to races I sit there and question why I do these, it just feels like a hassle to get there and I feel like I’m being a jerk leaving my child with her father. (Yeah… stupid, he needs to be spending more time with her anyway!) But then I’m always so glad I went to the race and leave hoping to find another one soon. I was literally thinking on the drive to this race, “Maybe I’ll just not do any races in 2016. It will be easier that way.” And now I want to sign up for more events.

I can keep myself in check though… January will be here before too long and I won’t have the option of doing races much as my CPA-spouse enters his busy season for work. But I wish it was easier for me to just do the races without giving myself a heaping dose of mom-guilt in the process.