How racing has changed over the years… Back in the day, I used to wake up so early to make sure I was all set to go. I had my clothes all laid out the night before, usually pinning my bib number on in advance. I got to the event super early to make sure I had a spot to park, and that I didn’t miss the start.

Today, I woke up at 5:45 because my kid started crying. So I got dressed and played with her until I left around 7:20 to drive over to my race. I got there about 25 minutes before the 8AM start time. I ran into my former co-coach for Team Challenge and spent some time chatting with him before I strolled over to the start line 2 minutes before the race started.

I will probably go back to my nervous ritual with Boston, but it’s kind of nice to just roll into a race and go.

Anyway… this morning I ran the Trick or Trot 10K here in Las Vegas. They were handing out flyers at the last race that I did, so I figured “Why not?” I wish I had taken “A” with me because it was such a fantastic family-friendly environment. But I didn’t want to push her on the trails for 6 miles. And some of the stretches were pretty narrow, it would have been hard to navigate the BOB through.

They did such a good job with this event, the whole start/finish area was decorated so well and they had tons of vendors with booths selling hand-crafted jewelry, essential oils, baked goodies, etc. There was a large area with little kid games, like bean bag toss and fish ponds and such. They had Shetland ponies there for kids to pet. There were bouncy castles. It was really a great environment! 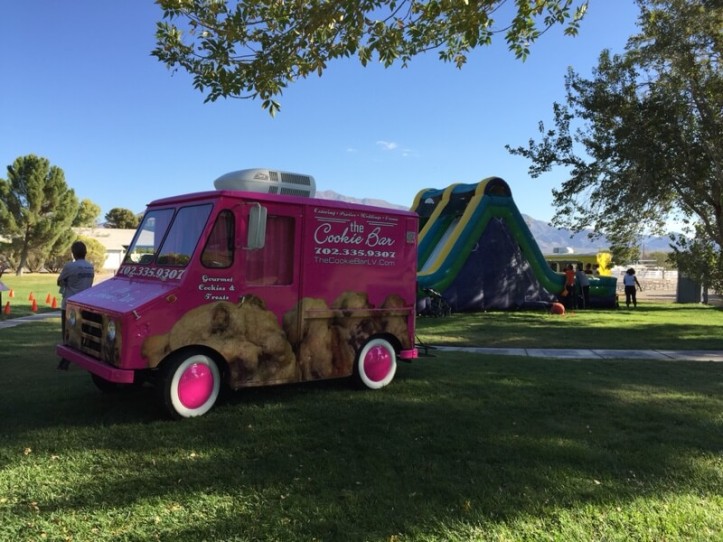 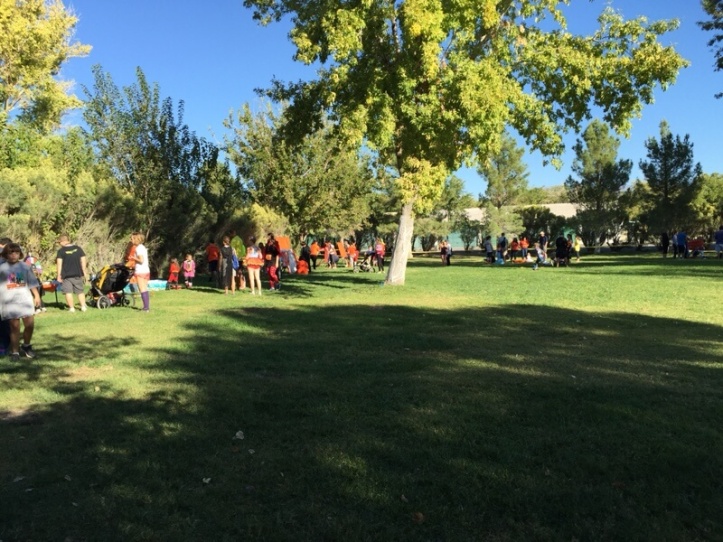 There were a lot of runners in costume. (Not me… I’m not a costume person. I can’t recall the last time I wore a costume. I did run in devil horns for a Team Challenge training run at Halloween once, that was the extent of my costumery.) I will say this, if you are planning on running in a costume and that costume involves wings… keep in mind the proximity to other runners at a start line and stick with smaller wings. There were a lot of wings beating other participants at first! There were also a lot of super heroes, lots of Wonder Women and Supermen. (Wonder Womans and Supermans?)

The race was a 5K and a 10K. For the 10K we just repeated the loop twice. The race started off on grass, then moved onto trail, then had about a half-mile stretch on an asphalt path. The route was marked well with volunteers at several spots that could potentially be confusing to anyone. They did have a little bit of a oddness with the mile markers… since they always had the two distances for both 5K/10K right next to one another. Like “1 mile” and “4 mile” side-by-side. But with the .1 at the end of the loop, then technically those next mile points are not at the same spot. Oh well, not a big deal. Just a quirk. I don’t think the course was an EXACT distance anyway, since it was a fun community event and not a certified course.

The one thing they needed to do was make the final stretch of the course marked off more… additional cones, maybe some tape in between them. The problem with having games on one side of the finishing chute and bouncy castles on the other, meant there were a lot of people drifting back and forth across the finishing stretch. Or people just stopping to chat with friends in there. And I saw a gal trip and fall about 20 feet from the finish because she was trying to go around a group of people standing on the course talking.

They gave away tech shirts to all participants and all finishers got a cute little medal. 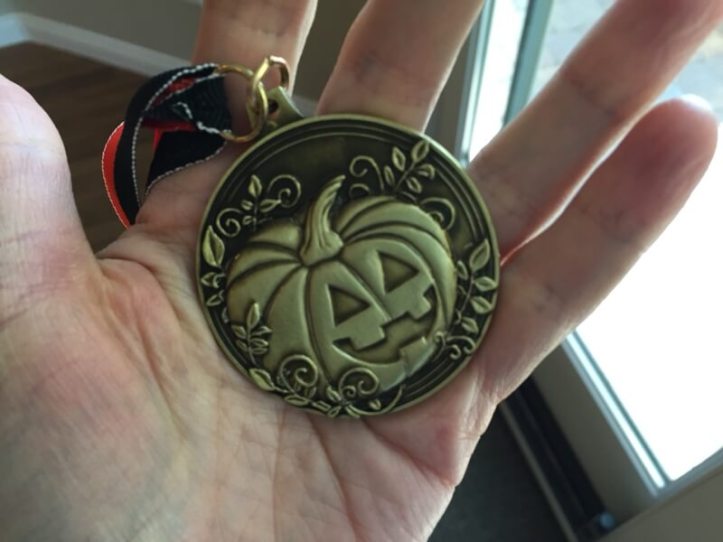 I have no idea what my official finishing time is. I didn’t see a lot of women doing the 10K so I thought I might have had a good chance at placing in my AG. But they kept saying, “We’re going to announce the results in the next few minutes!” for about an hour. Finally I just left. It was getting warm, it was nearly 80° when I left. We’ve had a warm October!

I wore shirt and shorts from Athleta that I purchased 2-3 years ago, an older pair of Saucony Virrata shoes and I had my new Armpocket i-30 to carry my iPhone throughout the race. I needed a new way to carry my phone since I upgraded to the bigger iPhone 6 and that worked perfectly!