My kid is 19-months-old today. It wasn’t that long ago that Alex was this tiny little lump that gave me the opportunity to sit in a chair and nurse her for hours. And to think I was annoyed sometimes that I didn’t get things done then! That was an amazing time… she’d fall asleep on me and I’d get to read books… made for adults… that don’t reinforce what color everything is or how many of each item is on the page!

Really, I’m kind of surprised at the books she wants to read. We read this book EVERY DAY! She brings it to me and says “book… book.”

And I’m not going to lie, there is a part of me that feels really weird telling a 1.5-year-old kid that the Athenians may die in battle because the Spartans can’t help them come fight the Persians. Or when she points at the page and says “What’s that?” and I reply, “Well, that’s a dead soldier.”

But we do read the books about colors, numbers, etc. too!

She loves being outside, we spent 90 minutes playing at the park the other day and I kept thinking she’d tire of it but eventually I was roasting and thirsty and ready to go. (I was also the only adult crawling through tunnels and climbing up all the toys, what up with that? The majority of those parents were younger than me, I’m sure of it!) The second we get home after I pick her up from school she says, “Go go go!” The basic translation of that is, “Put me in the stroller and let’s go!” I’m a little concerned for the summer, because I don’t really want to push the stroller around in 110+ heat, nor do I want to just wander around the backyard saying “YUCK!” at every mess Jade the Boxer has left behind when it’s hot out.

She’s very organized, likes to sort small things into larger things. Oh… she makes messes for sure, what kind of toddler doesn’t? But she also cleans things up too. She loves having a napkin at meals to wipe her hands on and when we go out she takes a napkin and places it on her lap. I love it when she does things like that, little things that you don’t even think she may have noticed.

She can repeat almost any word you say to her, not crystal clear but enough to know that she’s parroting you. She says “yellow” in the cutest voice almost like “yolo”, monkey and muffins are both “momo”.  She likes to write, she would much rather have a good pen and a piece of paper than crayons… but sometimes those will have to suffice. We have these color wonder markers that are great in that they don’t put color on anything other than the color wonder paper, but they suck in terms of instant gratification. You color on the special paper with them and then it takes several seconds for the color to appear. She is far more intense and focused with her pen art.

From my perspective, I love not being tethered to her in terms of breastfeeding, but there are times I feel like I may as well still be attached to her. At least when she was smaller I could strap her into the Ergo and carry her around with my hands free. Now she wants to be in my arms nearly all the time when she’s at home with me, fortunately she’s small and not too heavy, but it’s still awkward to carry 21 lbs of kid around all the time! And when I put her down, she’s figured out a new sentence, “Up me!” It’s so damn cute… but mommy can’t hold a kid all the time!

The questions are coming more and more rapidly these days about when we’ll have another one. It absolutely blows my mind that when I was Alex’s age, my mom had a 2-month-old. I honestly do not think I could handle that. And at this point, I’m 99.1% sure I don’t want to have any more kids. See, there is that 0.9% that thinks I should, just so Alex isn’t an only kid. But is that a good reason to have a kid? Not because I want one, but because I think I should provide a sibling?

My husband works way too much and I do a vast majority of the parenting myself. I do not understand how someone could want a kid so much that they would purposely become a single parent. To each their own, right? And even though Alex is the best thing to happen to me that I didn’t know I wanted, that still doesn’t turn on a “biological clock” that is ticking away before my uterus implodes. (That’s what happens right… or it turns to dust. I don’t know, something like that. The warnings from people seem so dire, I figure it’s gotta be pretty bad!)

Any moments that I feel like I have this parenting balance figured out are the moments when something bad happens. I guess it’s good that I feel like I’m walking a thin tightrope with it pretty much all the time then, right? I do wish I knew how people took their kids on all kinds of trips or even just seem to run errands or go out to dinner with ease. That all feels so hard, like I’m orchestrating a symphony with a bunch of people who don’t know how to play musical instruments. I’m supposed to go on vacation with my family this June and I’m terrified of the whole experience. I’m looking forward to it being OVER… not forward to the actual experience just because I feel so much apprehension when it comes to going places. I just never know when she’ll switch from Alex-the-Sweet to Alex-the-Angry. Her initials are AOW… which is also known as Act of War in military-speak and she can live up to that when she wants to!

I get frustrated that I can’t keep coaching Team Challenge since having a kid, I get annoyed when I see other women on social media doing all kinds of “fun” classes/events that I can’t fit in between my job and taking care of the kid. I can’t participate in obstacle course races or trail runs that I get invited to because you can’t push a stroller on those. I am part of a few different groups on Facebook for local running groups and it annoys the hell out of me when they’re making all their plans to go on long weekend runs or they can meet in the middle of the day to go run. I want to be able to go have friends and play too! But I feel immense guilt for wanting that to, like I’m supposed to be “Alex’s mom” now and not Jill. I don’t remember my parents ever going out to “play” when I was growing up… so maybe that’s part of the reason that I feel that way?

But truthfully, I had my doubts that I could make it this far when I found out as I was pregnant. So I’m pleasantly surprised with myself at doing pretty well with this mom gig so far AND being able to see glimmers of being able to do even more with… and without… her! 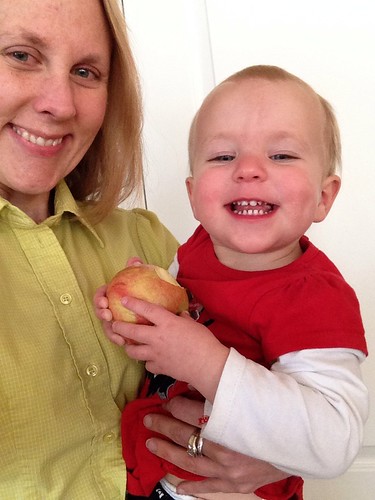