So, the baby is 8-months-old now. Actually, she’s 8-months and a week and a couple of days old. It completely blows my mind that 8-months have passed by already. I know everyone says that the time goes by fast, but when it’s actually happening to you it really does. 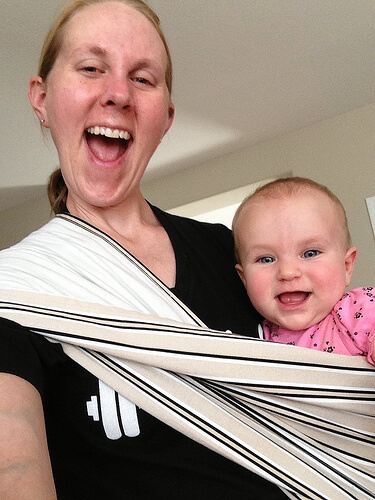 It’s interesting how much easier life is now that she can sit up on her own. You can plop her down on the kitchen floor with a toy and it feels far less weird than if I were to lay her on her back on the kitchen floor! It’s easier to dry her off after a bath, put lotion on her and brush her hair when she’s sitting up. I still wear her a lot of the weekends, she likes being close to me and I can get her to nap on me while I’m still doing things around the house. I really should put her down for naps, but I just don’t want to deal with the inevitable crying because she’d rather be with me. (I have the ERGO Organic Baby Carrier

, which I love. That sling up there in the picture… it really just worked when she was a tiny newborn, I don’t like it now. I tried, but we only lasted about 10 minutes before taking it off.)

But life is also more challenging when she moves so much. My girl is such a wiggle-worm, whether it’s in your arms, on the floor, in her bed or in the exersaucer… she is always moving. She doesn’t do a full-on crawl, more of an army crawl, but she’s fast with that. Many of my photos of late have her hands as a blurry streak, they’re always in motion. She plays hard all day long, she usually just takes two 30 minute naps during the day at school and then at night she crashes hard. Her teachers at school say they find it interesting how every other baby can take multiple long naps, but there’s Alex, playing-playing-playing nonstop.

She’s still small, she wears mostly 6-month clothes, but some of them are starting to get a little snug. I just think she’s going to take after me and be on the small side of the growth charts… and I’m okay with that.

She’s a good little eater… we introduced solids to her at 6-months and she has eaten pretty much everything I’ve given her. Green beans got a little bit of a concerned look, but if you mix them with butternut squash or peaches or applesauce, she gobbles them up. And the girl LOVES zucchini. I figured she would love fruits and hate veggies, but she does a good job with her vegetables. We recently introduced pouches to her and she really likes being able to feed herself with those. She also likes Baby Mum-Mums

a lot, although they’re messy… despite what the package advertises. I have given her Happy Baby Puffs

, but she drops most of them on the floor as opposed to actually eating them. The only food that she seemed truly repulsed by was hard-boiled egg yolk.

I’m glad that I’m making her baby food myself, but it’s sometimes kind of draining. It’s not that hard to make it, but there’s the portioning it out and freezing it, then bagging it up. Then defrosting the next day’s meals each evening after she’s gone to bed… I feel like I’m constantly dealing with baby food between all of that and breastfeeding.

I take pictures and video of her all the time and I file them in albums on my iPhone based on what month she’s in, with the intention of making a little “highlight reel”. It took me a while to get the 6th and 7th month videos made, both of them were put together in the past week. I edited them together on my iPad while she was eating… although, doing anything else while she’s breastfeeding is getting harder. She’s pretty active, even during that time. She’ll kick and wave her arms around and pull on my hair or shirt… we’d never be able to use a hooter-hider and feed in public because she’d just pull it off and/or move it around.

I love this girl so much!