Book Review: My Life on the Run 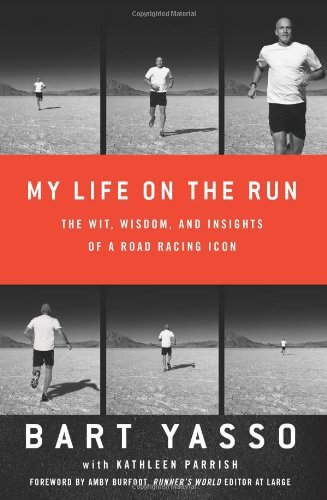 For travel entertainment on my recent trip to San Francisco I took the book ‘My Life on the Run’ by Bart Yasso. This book was such an enjoyable and easy read, I would recommend it to anyone whether they are a runner or not.

Bart Yasso has been working at Runner’s World magazine since 1987. He developed their Race Sponsorship program, thus he gets to travel all around the world to promote the sport of running, help organize races and be a face for the magazine. In that role he has traveled to all sorts of exotic places.

The book follows some of his experiences of running on high mountaintops, with crazy animals in Africa, through Death Valley and even in a nudist camp. Admittedly, these are not runs that I aspire to do, but it did help to encourage me and I think I may create a list of the races that I would most like to do at some point in my life.

The biggest thing in this book that touched me was in the chapter where Bart talks about being inducted in the Running USA Hall of Champions:

I couldn’t believe the sport was giving me its highest honors. It should have been the other way around; I should have been the one paying homage to running. After all, it saved me from a life of substance abuse and set me on a course where I got to run on all seven continents and meet the most dynamic people…

That spoke to me because although I do not have a substance abuse problem, I do feel that running is saving my life for other reasons. It’s a powerful sport, but it’s also such an accepting sport. Runners are an encouraging group at all different levels and that’s something that Bart shows and encourages in his many stories throughout this book. I would read it multiple times.

Find it on Amazon: My Life on the Run: The Wit, Wisdom, and Insights of a Road Racing Icon