3 Must Know Moves for Runners to Escape an Attack 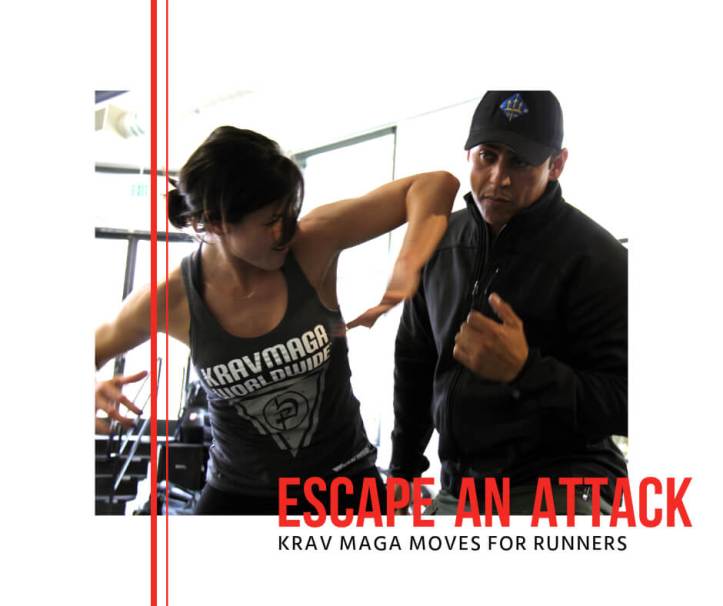 A few weeks back, I received a pitch email to learn a little more about Krav Maga. Something I would LOVE to do if I had more free time would be to delve into some self-defense courses. I remember taking one workshop when I was 15 or so and thought it was fascinating. Krav Maga was offering to share with me some moves that runners could use to defend themselves in the event they are confronted with a situation that would warrant this action.

I certainly hope none of us have to use this information, but I’m sharing it here (with their permission) for those who are interested.

For most of us running is therapy; we put our favorites tunes in, we lace up and it is just the open road and us. With summer months quickly approaching many runners will find themselves trading in their afternoon run for a nighttime escape. As peaceful and tranquil as this sounds it is also important to understand the dangers of running once the sun goes down. Becoming the victim of a physical attack is something that runners should all be prepared for.

The first principal of using Krav Maga is to identify the danger or the most dangerous aspect of the attack. This process begins by identifying what type of grabbing attack is being made. The big danger in a bear hug attack, especially from behind, is the potential for the attacker to control the body of and/or lift the other person. Once the attacker controls your body they can lift you and carry you away (into a van, to a place where other people can’t see what’s going on, to a place where friends are waiting to gang up), they can lift you and slam you to the ground (a huge risk of being knocked unconscious by the slam), or they can drag you around in similar fashion. 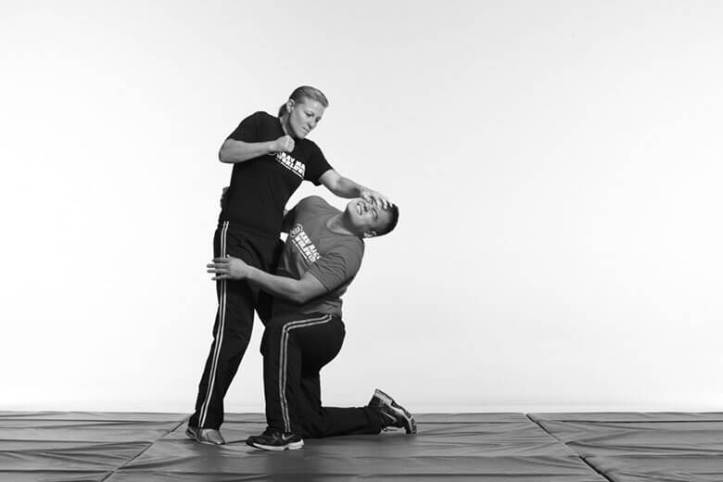 Krav Maga Worldwide™ teaches students that the best defense against a bear hug attack is to start fighting back right away. There are two things you must do in order to effectively fight back because of the dangers inherent in the attack. The first step is to drop your “base” or make yourself heavy. The second is to “space” or create distance from the attacker. In this case, because the attack is coming on from behind, there is an extra step; you have to “turn in” in order to fight. Here is a breakdown of each step:

BASE – Making your base heavier is relatively easy. When grabbed by the attacker in a bear hug, simply bend your legs and drop the level of your hips. Think of it as basically sitting down into a full squat (thighs parallel to the ground). Drop your hips and sit slightly back and into the attacker, with your head up, not folded forward. This immediately makes your center of gravity lower, which makes you more difficult to lift off of the ground. Dropping your base also puts pressure on the attacker as they know have to deal with your weight. From here, you can start to fight without the danger of being controlled and lifted from the ground.

SPACE – You cannot let the attacker stay close to you in a bear hug. You especially cannot let the attacker keep his/her hips close to you. Think about the last time you moved a piece of furniture, or a box of something heavy, you don’t keep your hips far away from the object and rely on outstretched arms to lift it, you scoot your hips and body close to the object and get underneath it. Along the same lines, an attacker has to be close to you to control you in a bear hug attack. With your “base” low, immediately begin sending strikes in a side-to-side motion to vulnerable areas on the attacker. Krav Maga Worldwide™ students are taught to go for a groin strike first. This strike can be thrown whether your arms are “trapped” meaning encircled by the attacker’s arms, or “free”. A groin strike will often cause the attacker’s hips to reflexively move away thus creating space between your body and the attacker’s. Aggressive and continuous, side-to-side motion also serves to create space from the attacker by making you more difficult to hold onto. It’s more difficult to hold onto someone who is constantly wriggling, than it is to hold on to someone who is static.

TURN IN – When you feel you have a solid base, and continuous side to side strikes at vulnerable areas have created just a little bit of space between the attacker and yourself, you are going to “turn in” or turn toward the attacker to continue the fight. You can’t effectively finish the fight with the attacker on your back. And it’s certainly going to be more difficult to get away with an attacker hanging on you. Krav Maga Worldwide™ students are taught to recognize when sufficient space has been created, and make their move to “turn into” the fight where they have full use of all their strikes. You can turn either direction once the space is there, but whichever direction you turn, you are going to turn in behind your elbow. So, if you are rotating to your left to turn toward the attacker, you are going to raise your left arm in front of your face so that the soft targets of your face (nose, mouth, eyes) have something slightly blocking them in case the attacker is looking to strike at you during the transition. You can also use this raised arm to deliver elbows and hammer fist attacks as you are turning in. Once you have turned “into the fight” you will continue to aggressively strike at all vulnerable areas until the attacker is broken and you can get away without being impeded.

Disclaimer: Most of the copy here was provided to me, but I’m just posting it because I found it interesting. I should charge people for this kind of stuff, huh? 😉 But I feel obligated to disclaimer the hell out of everything on the web these days. Sigh…