On Monday, April 20, 2015 I ran the Boston Marathon as part of Team Stonyfield, with over 27,000 other runners participating in the race.

Where do I even begin? This was one of my best running experiences ever!

I arrived in Boston on Saturday evening; I flew out of Vegas at 7 AM to San Francisco and then caught another flight to Boston. It was the option that got me to Boston the earliest! My friend Terri picked me up at the airport, she was gracious enough to be my host and guide for the weekend in a city I had never been too. We went back to her place to dump my stuff then went out for Vietnamese food.

Sunday was a beautiful day. A little chilly to my desert blood, but not that bad and the partly cloudy sky made it fun to see a little bit of Boston.

I had a lunch date with the members of Team Stonyfield, my first opportunity to meet the team in person and they’re all wonderfully kind people. And the Stonyfield people were fantastic, so supportive and encouraging. They gave us all gift bags with a hat, sweatshirt, carabiner and a card. Lunch was at a place called Sonsie, the food was tasty, albeit a little salty. But before a marathon extra salt is good!

After eating we went to the expo and took group photos at the Stonyfield booth. The Stonyfield members at the booth greeted us like we were rock stars and made us feel welcome.

Next I needed to pick up my race packet and bib number. I made my way back through the expo and saw Varidesk was there, I made a mental note to go back because I’ve wanted one of those for a while now. I also saw Epson there with a running watch and wanted to see what that was about. If it is running and technology, I want to play. I embrace my geek girl status!

I took the escalator up a level to retrieve my number. I was super impressed with how quick and efficient that process was. And the volunteers helping with the process were so nice and seemed genuinely happy for all of us. All thousands of us!

Back down to the expo, I was dumped into the official Adidas shop. I wanted to make two purchases: buy the Boston Marathon jacket and the Spike the Unicorn stuffed toy for my daughter. I struck out on the unicorn, they sold out. I didn’t know the toy existed or that it is apparently a hot commodity. I just knew that after my daughter’s requests to “go to the unicorns” a few weeks ago, it would be a fun surprise after mommy had been gone a few days. So if I do the race again, I will try to get her a unicorn earlier!

I wandered through the expo a bit, met up with Terri and forgot to stop by the booths I had wanted to. I did sample the new Generation UCAN bar and it tasted pretty good. I also bought a Sparkly Soul headband from their Boston Marathon collection.

Terri and I took the T back to her place and ordered in pad Thai. I have been terrible with having any kind of consistent pre-long run meal this training cycle, so I didn’t have anything in particular I wanted. But the pad Thai tasted great and was good energy for the race. Need to remember that for the future.

Monday morning I woke up around 5:30, which sounds like sleeping in compared to all my training, but it was the same as 2:30 AM at my house so it was actually really early. However, the time difference hadn’t started to affect me much yet and I was excited and ready to go. I ate some cereal with almondmilk and a banana, got dressed, covered myself in BodyGlide

and slathered my feet with RunGoo. I have never had problems with lots of blisters, just occasionally I’ll get one but it’s not consistent ever… But I had no idea what was going to happen during the race due to the weather.

In addition there was wind and the temps were supposed to be in the 40’s when I looked at the most updated forecast. (That screenshot was from the day before!) I’m glad Terri lent me a long sleeve top to wear under my tank because a tank and arm warmers wouldn’t have cut it for me out there. I had throwaway sweats and a fleece jacket to wear before the race started too.

At 8 AM Terri and I walked over to pick up a ZipCar so she could drive me to the finish area. I checked in my gear bag with clothes, flip-flops and face wipes in it. 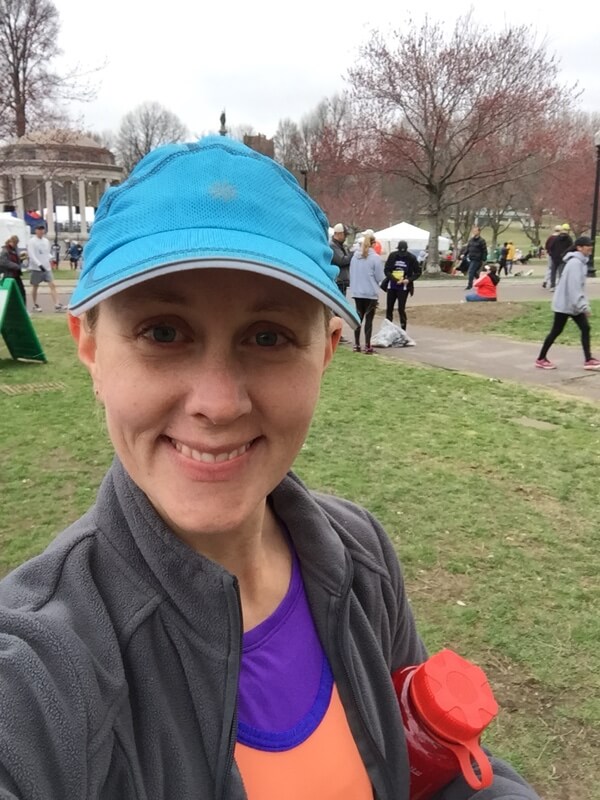 Next I met up with Team Stonyfield members Laura and Rachel, and we boarded a bus for Hopkinton.

To be continued in another post… this is getting long!