Saturday evening I ran the antithesis of my morning 5K that day… instead of a fun little community race with people doing it for fun and for time, the night one was all about partying. The Foam Glow 5K took place at Sam Boyd Stadium and was host to 9000 party-goers. I was really quite surprised at the amount of booze people were consuming BEFORE the “race” had even started. Like most of these fun/themed runs, it was not timed.

I was a little on the fence about this race… I ran The Color Run and had fun. I ran a Color Me Rad race and had less fun. I’ve made fun of the crazy themed races that are emerging every minute. But I went to the race with a couple of friends and tried to keep an open mind, which served well because…

I wore the race t-shirt, one of the rare instances where I would actually do that. It was a nice, crisp, white canvas that I could totally destroy with the color!

We got there with plenty of time to kill, but we got great parking and got to be involved in all of the pre-party stuff. Initially I wasn’t going to get messy before the race… but that plan quickly got tossed out the window.

The race was set to start at 8pm, or as the sun set so we could run in the dark. When we started to see people filtering over to the start line, we made our toward the start line. I knew we didn’t want to be at the back of the pack because they were releasing the runners in waves. They just strung ropes up in between segments of people once the start chute was filled and the start time was near. We ended up being in the second wave. Looking back at the sea of people behind us about 20 minutes before the race started, I was glad I didn’t have to wait for all those people ahead of me!

It got dark and we started running. And then after a little bit, we started to walk. My co-runners weren’t quite prepped to run a whole 5k straight, but that’s okay. We had fun power-walking and running. The first foam station was, unfortunately, out of commission when we got to it. There was an ambulance with flashing lights, so I wonder if someone was hurt or sick. (Drank too much in the heat then ran?) But the other foam stations were blasting, you had to run through a nice layer of foam that was accumulated on the ground, while foam shot out of cannons at you. There’s no avoiding it, you will get messy. And it’s fun!

We ran across the finish line… kind of. It was the only finish line I’ve been to where you actually run toward the finish line, then pause to cross the line while waiting for people to take pictures!

Then the after-party! If you don’t feel like you have gotten colorful enough in the pre-party and during the race, you have the opportunity to dance to club music while getting blasted with even more foam under blacklights with glow necklaces! 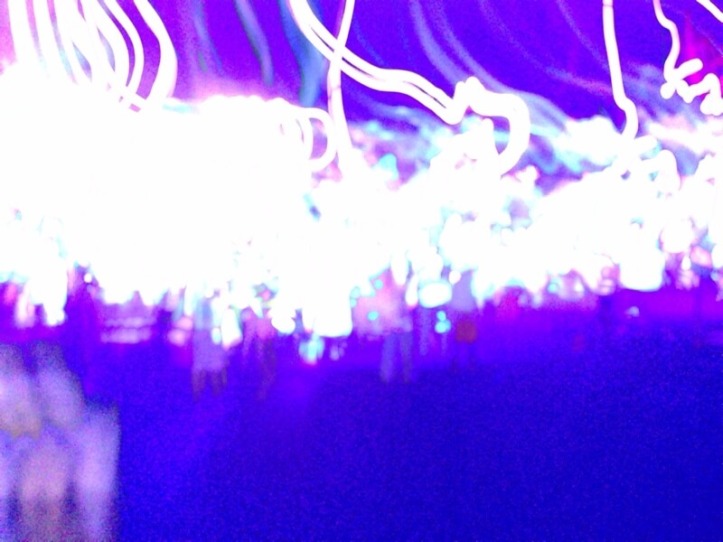 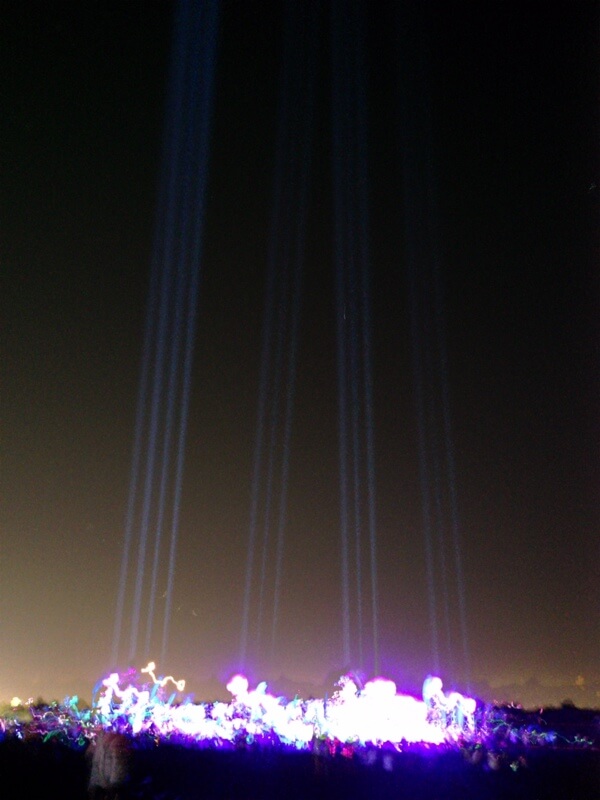 We jumped into the party, got covered in a new layer of colorful foam and headed to the blacklight photo booth to take our picture.

Then we went back for more foam! But after a bit, it actually started to make me feel cold! Also, the foam REALLY REALLY REALLY BURNS the eyeballs. I was surprised at how much that hurt. If they marketed it as “Join 9000 of your not-closest friends as we spray foam into your face that burns your eyes out of the sockets” nobody would sign up! Okay, it’s not that bad. But it does hurt a lot! I actually got pretty adept at turning sideways and running with my eyes closed in the race. But there was no way to avoid it when you’re being sprayed from every direction in that after party!

I don’t think I’ve ever been messier in my whole life, but it was so much fun. I got home and my husband told me I looked like I’d been murdered.

I still have a little bit of lingering color around my fingernails and my eyelids were kind of hard to get un-pink, but the rest of me was clean immediately after my shower. It didn’t stain my hair at all (DAMN!). The next test will be washing my running clothes to see how they come through. The shoes are permanently colored, but they already had a couple of layers of color on them from the other colorful runs I’d done. They are my designated “color-added” run shoes. (I’m trying to avoid using the official name of one of those races to describe them all! I’m so weird with technicalities like that! Like “Kleenex” vs. tissue.)

If you get the chance, grab some friends and do one of these. I actually have some other friends that I’d love to take with me on a race like this because I just know we’d have a blast.