Whew… it’s Friday. I feel like I missed my weekend a little bit last week. Which is weird because I got to skip out on normal chores like laundry/groceries/etc. and leave town. I got a long night of sleep on Saturday… but just the effort of taking a toddler out-of-town by myself leaves me physically/mentally/emotionally exhausted! So I’m kind of looking forward to a normal, boring weekend!

Have you ever seen the Pinterest pin (or floating around other places) of cooking an egg inside a bell pepper ring? I had also seen people attempt it online where it ended in a mess. I kind of assumed it would be a wreck, but I got some peppers in my produce box so I decided to give it a try. 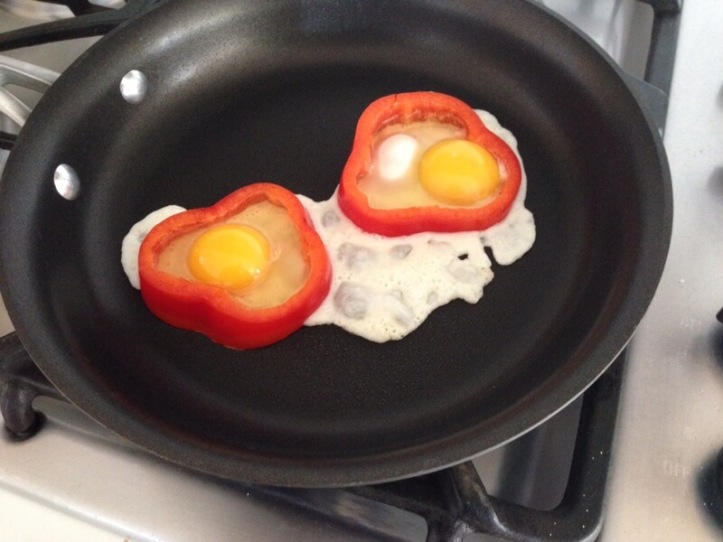 It worked for me! Not as beautiful as some pics, but good enough and it was a good lunch. I’m pretty sure the kiddo wouldn’t eat eggs like this yet though. I usually just make scrambled eggs because they’re harder to screw up then trying to flip an egg over! The pepper was like training wheels for flipping an egg.

I hate dry, scaly feet. I’m pretty particular about that and I tend to keep my feet in pretty good shape. But running, hanging out barefoot most of the time, living in a dry climate… there’s bound to be some roughness. Recently I heard about a product called Baby Foot. Basically you soak your feet in some fruit acid gel for an hour and all the dead skin on your feet is supposed to come off in a few days. So I bought it. The gel comes in these plastic booties that you put on your foot and then slip socks over, so it’s not like you have to sit in one spot with your feet in a bucket, but I wouldn’t recommend walking around a ton in the booties because it is slippery. Anyway, 7 days later… my feet look horrible – all peely and scratchy – essentially they’re molting. Right now I really want to take a foot file to them, even though the directions say don’t do that. But if my feet are still looking this horrible in another 7 days, I’m buying a power sander!

I was sent a Hatfield Strap a bit ago. It’s a “one-size-fits-all” strap that is supposed to help people get a good stretch in their feet/calves.

However I don’t feel like I look like that when I try to use it… it’s seriously a LOOOOONG strap and I feel like I’m constantly pushing/pulling/twisting/unwrapping/unbunching some section of it! Yes, it can provide a good stretch once in position, but I think it’s a bit overkill, especially for me since I don’t have plantar fasciitis issues and this is supposed to help target stretching for that problem. When you add on the optional shoulder strap, it really starts to feel like you’re playing a game of Twister with the thing.

Ever tried making something from Pinterest and had it bomb? Pinterest fails are fun to Google if you ever get bored! Are you on Strava?