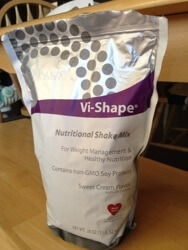 Have you ever heard of ViSalus Vi-Shape® Nutritional Shake? I hadn’t heard of it before until they reached out to see if I would participate in their recipe round-up. They would send me a bag of the Sweet Cream flavor protein powder and I was just supposed to come up with a recipe using it.

Well… initially, I declined. I told them that I didn’t think I was “qualified” to come up with a recipe. But they told me that I really would be and then they mentioned that the shake powder tasted like cake batter.

Seriously, if I could tell you guys my recipe was to just pour some almond milk, add a couple scoops of this stuff, shake it up and drink it I would be tempted. Because it is so good! The protein powder is a mix of soy and whey proteins, has 90 calories and 12g of protein in two scoops.

But I needed to come up with a recipe. Just as an experiment, I mixed it with greek yogurt. Voila, instant cheesecake!

But that’s not really a recipe, so I went back to the drawing board. (Cutting board?) This time my thoughts gravitated toward a crepe. And it tasted alright, but I’m just terrible at making crepes and they were pretty ugly. This was the only one that came close to holding it’s shape.

They were still pretty fragile, thus the crepe, berries, whipped cream in a bowl presentation. So I moved on to cookies. I went through several attempts, but I think this one is the best. However… I have a hard time calling them “cookies” because of preconceived ideas of what a cookie is. This is a soft, cakey treat and it’s kind of like a cookie, but not really a cookie. Thus, I’m calling them Pumpkin Protein Bites. 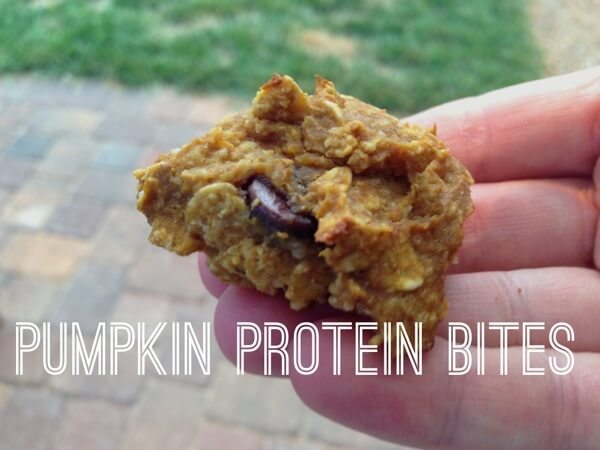 Thank you Visalus for letting me experiment! I actually think I’m going to play around with the protein powder more and see what else I can come up with, I had fun doing this!