This morning I ran a race. My race started at 7 AM. Things have sure changed since I became a mother. In the past, I probably would have woke up at 4 AM for this, just to stress and fuss over things, making sure I had everything together and that every inch of exposed skin was slathered in sunblock. These days, I value my sleep too much. I woke up at 5 AM, pumped while eating a Larabar, got dressed, grabbed some essentials and was in my car driving to the race by 5:45.

The race took place on the Cottonwood Valley Trails, near Blue Diamond, Nevada. This means it took me about 40 minutes to drive to the start line. I was worried that I wouldn’t be able to find the start, but it was very obvious where things were going on. I pulled into the lot, got my race packet, used the nasty pit toilet and was ready to go with 15 minutes to spare! 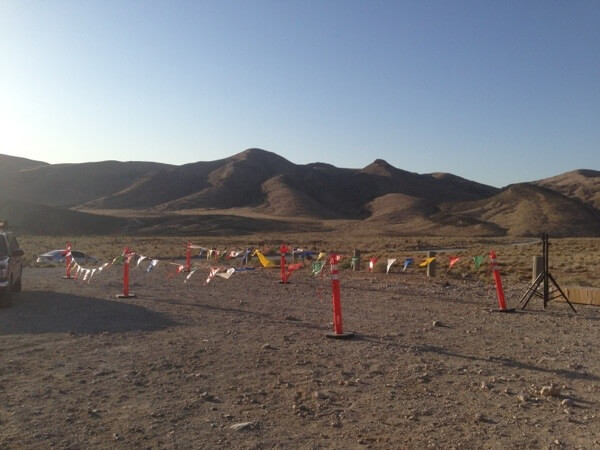 The race was the Ride the Wind 100M/100K/50K/Marathon/Half Marathon/10K. Lots of distances. The ultra distances and marathon started at 6 and 6:30 AM. As the runners for the half and 10K lined up to listen to instructions, I noticed a little girl all dressed in pink. 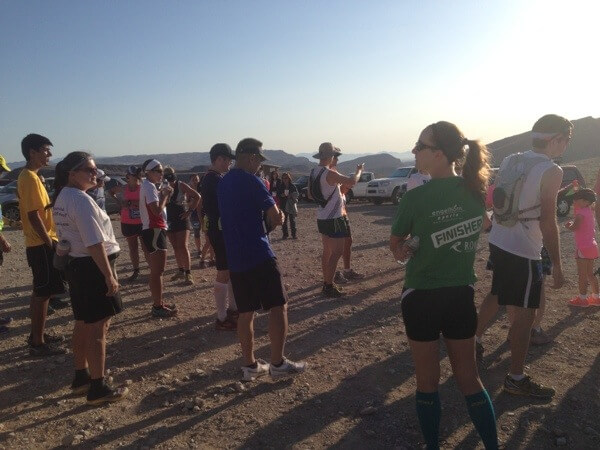 When we lined up at the start, she was standing near me with her dad. I asked her how old she was and she told me she’s six. Can you believe that? 6-years-old and doing a technical trail run! Her dad then said that her 12-year-old brother was out doing the 100-miler. Uh… WHAT?!

We were sent off and started to run. The pre-race instructions told us the trails were very technical with lots of rocks and that was the truth. The first stretch I was starting to wonder why I thought this was a good idea, I kept rolling my ankles on loose rocks. 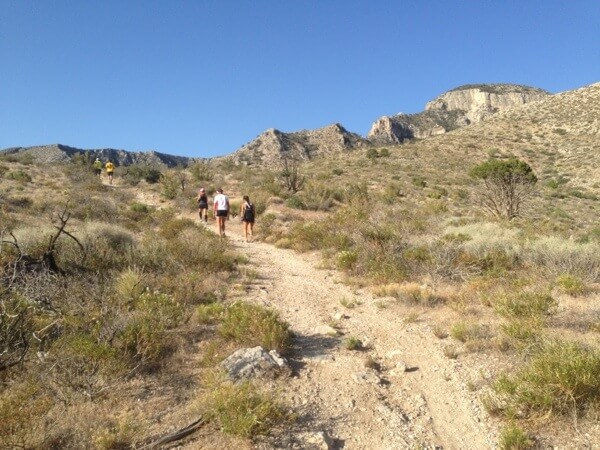 But after a while, we got to go downhill. And the trails even seemed a little clearer at times! Whew! 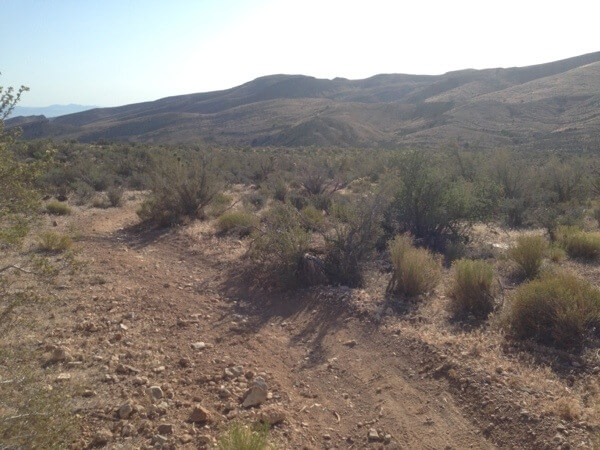 I got a little lost at one point. It wasn’t just me though, there was a good sized group of us that got lost. I figure I added nearly a mile to the race distance. Plus the official measured distance of the race wasn’t a traditional 6.2 like a 10K should be, but 6.67 miles or something like that. I’m totally okay with that too… it’s TRAILS! Glorious TRAILS!

I loved this race so much. It was really pretty out there, very exposed open desert but still stunning. We had great weather for the weekend, a sudden “cool-down” meant the race was 58 at the start and 69 when I was leaving to go home.

The race shirt is a tech-T, fairly simple. Not covered in sponsor logos and has the race logo on the front along with a photo on the back.

The medal was two-sided. Cool concept, it’s a little fuzzy visually though. 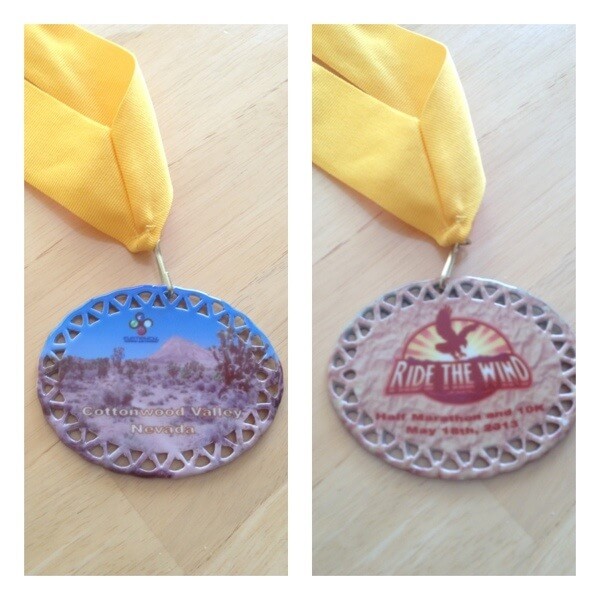 The gear bag was one of the nicer canvas drawstring bags I’ve received at a race. It has smaller pockets on the front and back that velcro shut. One even contained a poncho! We got a sample packet of Hammer Recoverite, a buff with the race logo on it, an On the Go towelette, a bottle opener, coupon for a discount at RecoFit and some literature from Hammer. I thought there was supposed to be something from Energy Bits in there too, but maybe I just missed getting that in my bag.

I really wish there was a bigger turnout for this race, it’s a great location. Granted, it’s BLM land so there can’t be a lot of people. But probably more than this. I hope they can continue to hold it!