Rain started to fall a little as we made the 45 minute drive to Hopkinton. It was just a sprinkle and stopped by the time we were there. 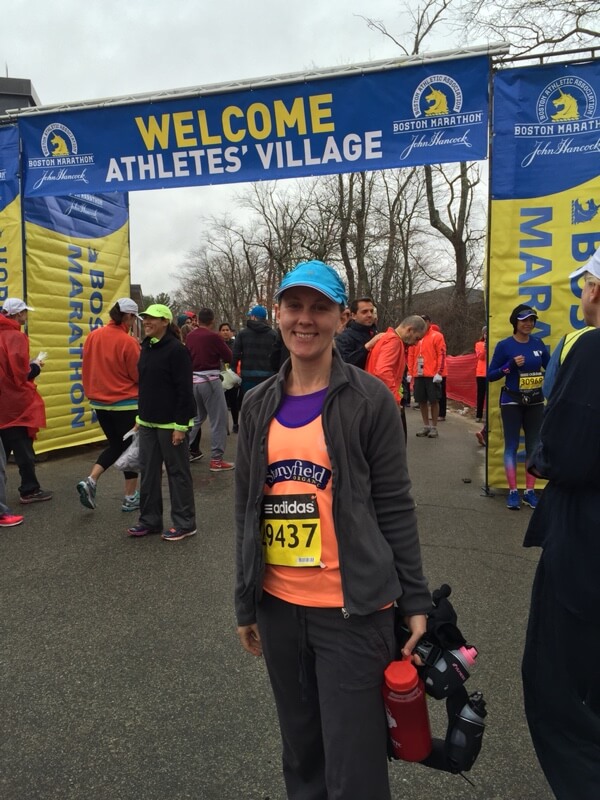 But the Athletes’ Village was kind of soggy. There was a big tent set up with bagels, bananas, water, coffee and Gatorade. People could spread bags, or whatever items they had, on the ground to sit, but most of the people were in line for the potties. And many had already run out of TP! You’d think with how detail-oriented everything was with this race, they wouldn’t be out of that!

We found teammate Angela there and hit the potty line. And it wasn’t long before they announced it was time for our wave and corrals to start heading toward the start line. Volunteers checked every bib to make sure you were in the right corral, no jumping ahead like I’ve seen in other races. I’m glad for that.

It’s nearly a one mile walk from the Village to the start line. Along the way in this shuffle I ditched my sweatpants, but kept the jacket. It was also during this walk when the rain started to fall more steadily.

The start was rather sudden, we kept shuffling forward as they released corrals and all the sudden – RUN! – it was ON as everyone realized they were at the start line.

Rachel and I had decided to start out the race running together and keep evaluating how we went along and how we felt. Both of us had kind of lonely training with many miles on our own and we each appreciated the company. I can’t imagine that you’d ever run alone in Boston, there are so many people, but it’s nice to have someone in particular that you’re checking in with throughout the miles.

The first miles are all downhill; over and over I’ve heard the biggest mistake runners make in this race is going out too fast for those early miles. I was very aware our pace wasn’t exactly where I wanted it to be, a little fast, but not too bad. And it felt so good. Oh… and there are so many people, it’s hard to not be swept along in the crowd. Despite the rain, despite the wind, despite the cold… I was having so much fun. 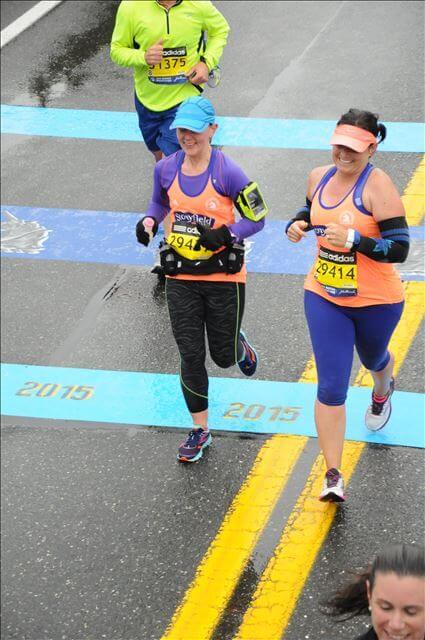 There’s really no way to get how much this area loves the race until you’re there. I’ve heard stories of the crowd support many times, yet it still blew me away. Even in the rain, people lined the streets. For 26.2 miles you have people screaming and cheering for you. They set up tents in their yards, have music blasting, people playing various musical instruments (drums, a fife, cowbell…) and you can get aid between all the official aid stations. Residents hand out water, Gatorade, Twizzlers, oranges… I can’t believe how much pride they have for this race. The aid stations were very consistent: every mile with Gatorade Endurance and then water. The volunteers all smiled and cheered for us, even as they had to stand in the rain and cold.

Rachel and I decided that at the halfway point she would dig her phone out and we’d take a picture. Both of us had our phones in plastic bags tucked firmly away so they didn’t get soggy. Everything else was soggy, must protect the electronics!

The Wellesley College Scream Tunnel is amazing and loud, you can’t help but smile as you run through their noise and signs. Going into this I wanted to record this section, but with the rain I didn’t get any my phone out. And even with the rain there were a lot of girls out there… thanks ladies, for braving the cold/wet/wind to cheer us on!

Heartbreak Hill has the reputation, but really there is a series of hills leading up to Heartbreak. It’s just once you top Heartbreak, the real climbs are finally over that everybody looks forward to! It’s not that it is super steep either, it’s more a lot of climbs in a row and the fact that they come so late in the race after you’ve been running downhill. But I conserved energy and felt really strong at this point still.

Rachel and I took some walk breaks on the hills, making agreements on where to start and stop our breaks. “Start at the umbrella and end at that tent?” She tried to encourage me to go on ahead, but I told her she was stuck with me. I was having too much fun having a pal on course, someone to share all the amazing energy with me, I wasn’t about to ditch her.

My friend Terri’s apartment is actually right on the race course, so I got to wave to her. She had some things to offer me if I needed them; a jacket, new hat, gloves… But I was feeling okay and nothing added to me at this point could change how soggy I felt. So I waved at her and we pressed on. She said that most people she knows say they don’t remember the race from beyond her place cause it’s so late in the race, but I’m pleased to say I do. I felt FANTASTIC!

I remembered signs at the expo saying “Right on Hereford, Left on Boylston”, and in the final mile as I saw the course turning right I knew we must be at that moment. I wanted to just charge ahead full speed, it was so exciting knowing I was going to finish another marathon after a long hiatus, and not just any marathon… The Boston Marathon!

Rachel and I promised to cross together and that we wouldn’t mess up each other’s finish. She had a friend charge ahead of her at the last minute once and I had a friend cover my face in the finish as she outstretched her arms. We grabbed hands briefly for a moment and then crossed that blue line. It was also so great to have someone who I could immediately turn to and share in the moment of victory… the “Holy crap we just ran the Boston Marathon!” moment. 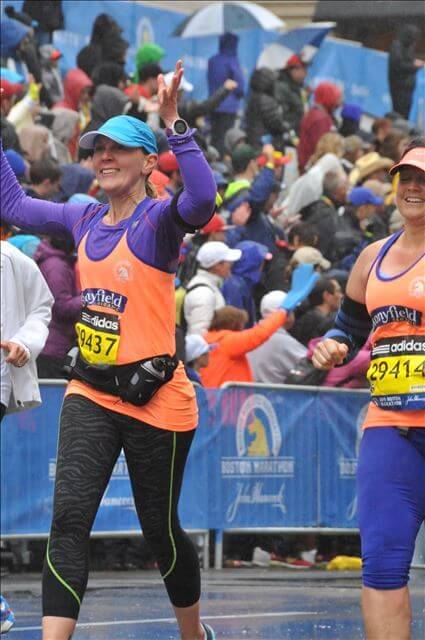 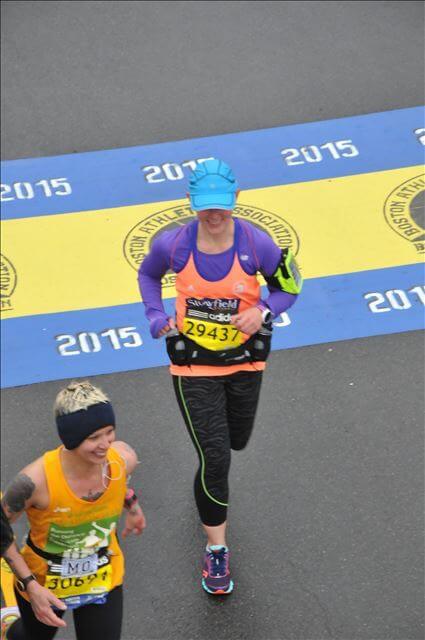 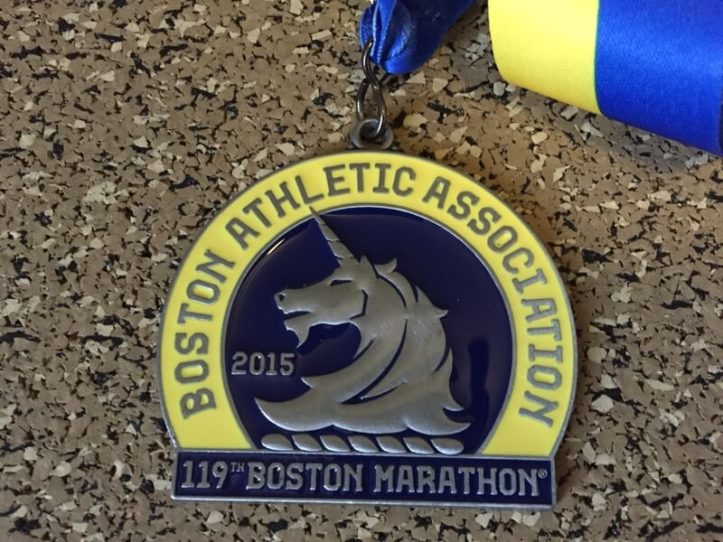 This was my best feeling marathon ever! I had a dopey smile on my face most of the race, I never felt my form slip, my energy was consistent… It was simply amazing. The rain seriously worried me, but it didn’t pose a problem during the run. 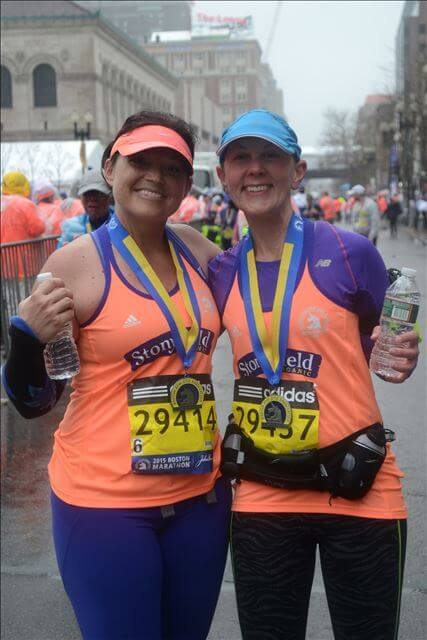 The finish area was great, the volunteers put the medal around each finishers’ neck and treated each of us like we were special. Then volunteers put the heatsheets on each of us, helping to guide our arms in, pulling the hood up, and fastening the Velcro closure for us. (BTW – the heatsheets were WAY better than a simple mylar blanket, which I couldn’t have held on to at that point as my hands were frozen.) We were handed a bag of snacks and volunteers were passing out bananas, even offering to peel them for us.

It was just as we approached the finish line the rain started to fall harder. I went to the gear check area to pick up my bag and it seemed so far away. I had dry clothes in my gear bag, but no way to get dry. I ducked into the women’s changing tent and pulled off my wet top layers and put on a new shirt/sweatshirt on top of my wet skin. I don’t know if that actually improved how I felt or not, I was shivering pretty hard. I didn’t really want to sit down on the wet ground to pull off my soggy shoes and walk through all the puddles in flip-flops, so I kept my soggy shoes on.

Then I had to walk just as far to get to the family meetup area where Terri was waiting for me. I eventually found Terri and we boarded the T to get back to her place. (Marathon runners ride the T for free on Marathon Monday, good thing… my hands wouldn’t function to find my money.) I’d have to say the finish area was the hardest part of the race for me, and I think that was mainly due to the weather.

I had an amazing time, I would love to get the opportunity to do Boston again in better weather. But I’m so grateful to my sponsor, Stonyfield, for getting me there. This was the experience of a lifetime and just what this mom needed to recharge. I guess I recharge by completely draining my physical reservoir and letting my mental/emotional reservoir refill at the same time. These past several months have been difficult for me, but this weekend has brought me back to life!

And since my phone was ensconced in layers of plastic baggie to protect it from the rain, I didn’t get many pictures on race day. So here’s a bunch of pictures of some of the things I received from the race packet: 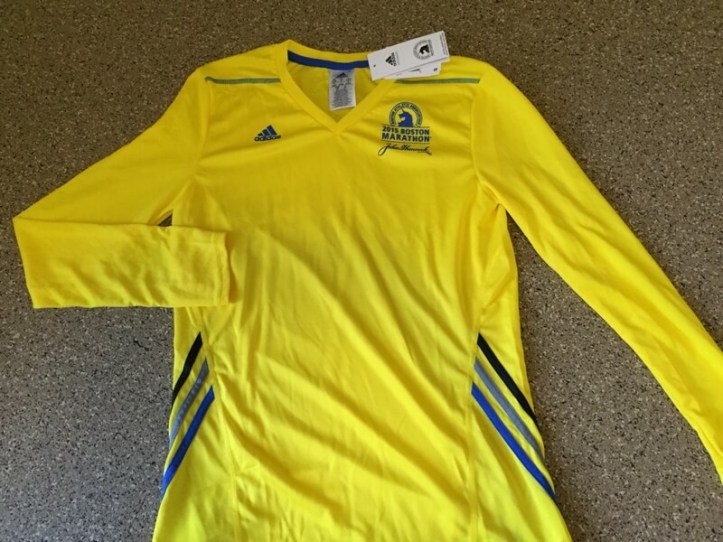 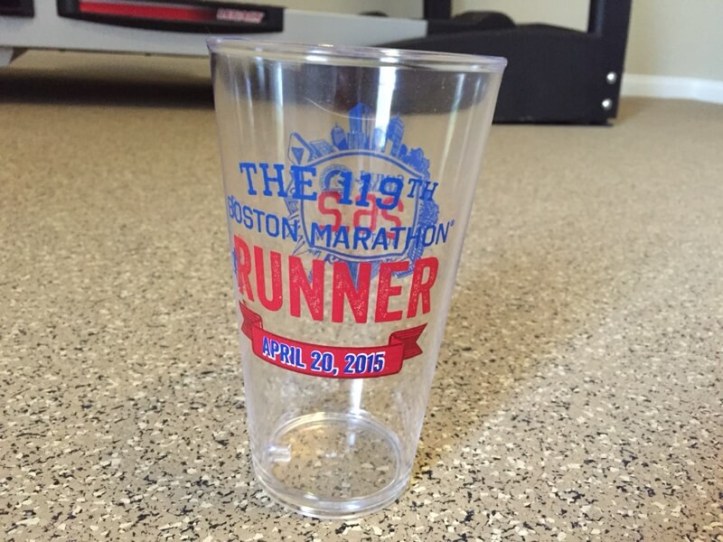 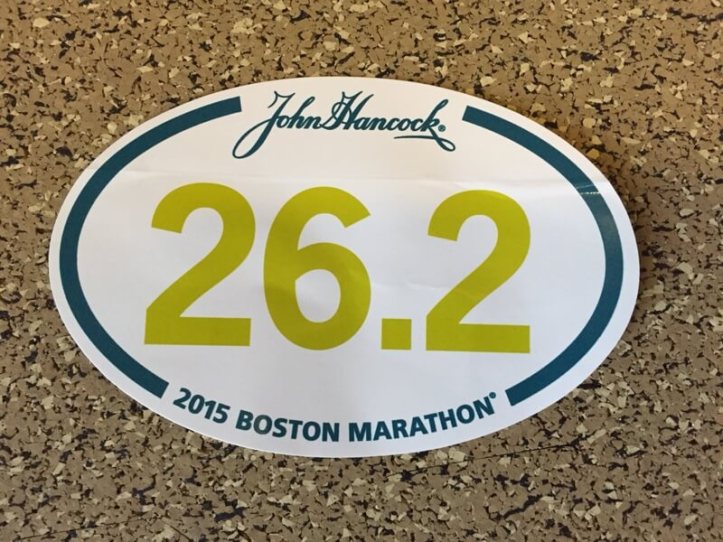