Let’s round-up some stuff from my inbox that I’ve found interesting lately. None of this is compensated, it’s just sifting through all the stuff in my JillWillRun email – which I can hardly keep on top of lately – I mentioned once that I get weird weird weird pitches in there now for a wide range of products that I would never even dream of reviewing/discussing on my site or maybe not even to my closest friends. It’s kind of a bummer; I’m sure there are even more interesting things that land there and get lost amongst the sea of weird. (Seriously, weird uses for marijuana and vapor cigarettes and all sorts of pitches. Not just regular junk mail, but PR people pushing their client’s wares.)

I was given the chance to review some shoes from Mizuno, the Wave Paradox shoe. Well, it’s a lightweight support shoe and I run in neutral shoes. So I worked out a deal for my pal and co-founder of TheRUNiverse.com Chris to take them on for a trial. Well, I was super happy to learn that not only did Chris like the shoe, but they seem to be the fix for his recent running shoe woes. His previous shoes were changed after the model was “upgraded” (I’ve had that happen to me!) and he was on the lookout for a new pair. His verdict? “They are one of the lightest support shoes I’ve worn, and they feel wonderful on my feet.” So if you’re in the market for a new lightweight support shoe or just want to try a different model to switch things up, check out his full review over on TheRUNiverse.com and take a look at the Mizuno Wave Paradox. (Plus they look pretty sweet!)

Do people ask you when you’re going to do a triathlon? I get that a lot… and I really don’t have a desire to do a triathlon. Well, until I learned about the Wanderlust 108. The three events for this will consist of a five kilometer run, a meditation / lecture session, and a large-scale 90-minute yoga class. Right now there are two of them scheduled: September 13 in Brooklyn, NY and September 28 in Atlanta. They need to have one on the western side of the country, because I really want to attend! I was actually surprised to see it is only $58 or $48 to attend (depending on the location). There are 5K runs here in Vegas that cost near that much, just for the run. Of course, you add in travel cost/time it’s not as cheap… but it still sounds like my kind of tri. Before I had a kid I did yoga about 4 times a week (usually in the home, I didn’t get to classes as often as I would like). And post-baby I’m sad to admit that it’s probably more like once a month. I really need to refresh my practice. (I also easily got in 4 runs a week and now I battle to get my 4 runs. I had a lot I did more frequently before I became a mommy.)

A Columbia store is opening in Las Vegas on August 22 at 9am and the grand opening celebration continues through August 24. It will be opened at the Premium Outlets South – 7400 Las Vegas Boulevard South, Suite 9, Las Vegas, NV 89123. Their Omni Freeze Zero line is kind of interesting, your sweat activates it to keep you cooler. I still have a couple of months of heat living here in Vegas.

One month, one cause, one million miles – to find a cure for childhood cancer. Cancer sucks!

CrunchLive contest… you can snap a pic and share it on Instagram with the hashtag #anytimeanywhere to show where you want to do it…. you know, workout. Get your mind out of the gutter! Winner gets two round-trip flights on Virgin America, an iPad and a year subscription to CrunchLive.com. (Which has a bunch of fantastic workouts. You can try a free trial on the site too. 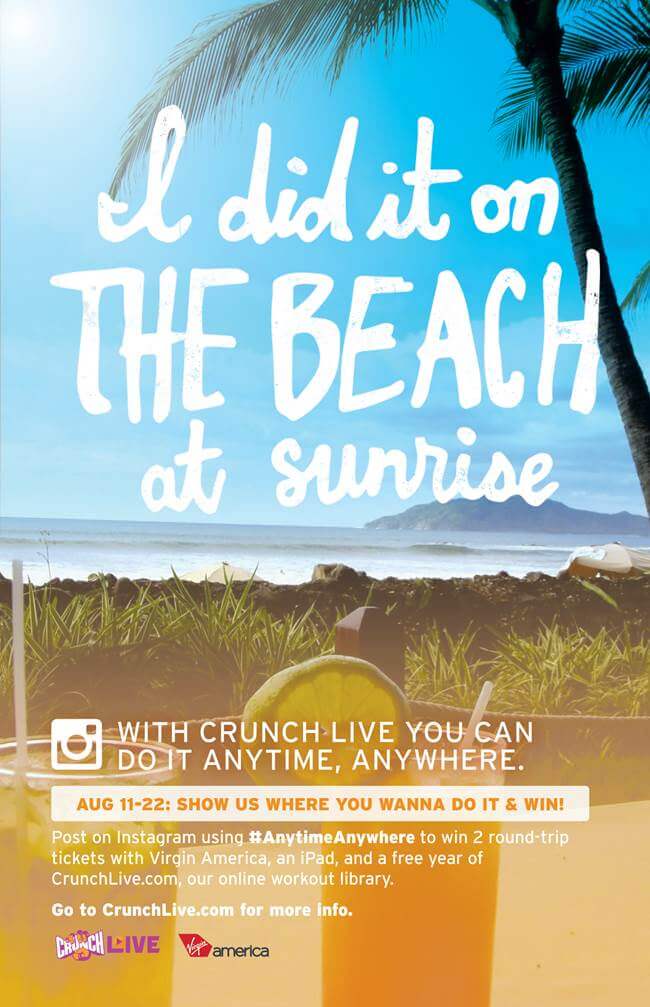