National Eating Disorder Awareness Week 2014 is February 23 to March 1. It was during this week several years ago that I went “public” with my eating disorder battle. So I thought I would use this week to check in with an update on my recovery.

When I entered treatment, we learned that it typically takes 7 years of treatment for a person to reach a state of being “recovered” from their eating disorder. This marks 5 years since entering treatment for me, except I’m not doing any formal treatment these days (groups/therapy/etc.). Do I feel “recovered”? Well… no. I still struggle with the desire to restrict, nearly every single day I have some kind of thoughts but when I’m stressed the desire is really strong. But I am a lot better at being able to resist that and know all the reasons why I shouldn’t and flat-out CAN’T relapse. My daughter is the biggest reason. It’s a miracle that I even ended up pregnant with her, since ED did take away all indicators that would ever be possible. I know I want to be around for her and I don’t want to say/do things that might negatively impact her body image.

I’m still unsure that “recovered” truly exists when someone has an eating disorder. I have to hope that it does, but if you have to remind yourself of reasons to not engage in those behaviors forever, then is that really “recovered”? Or do those ED thoughts vanish at some point? It’s something that I wonder about sometimes but I don’t have an answer. I do know that, unlike an alcoholic who could live a life without ever needing to touch alcohol, an eating disorder patient does need to develop a healthy relationship with food. I think I’m in that territory now though, I can enjoy a variety of foods and I don’t feel “guilt” over eating formerly ED-forbidden foods. Well, sometimes I feel a little guilt. Hell, it’s stamped on the packaging of food all over the grocery store that things are “guilt-free” so that must mean the rest are “guilt-full”?

I do think my bullshit-radar is extremely heightened and it makes me angry how many messages in the world are disordered and treat that like it is completely normal. In fact, it’s almost like disordered eating is encouraged or praised in many arenas, something we should all aspire to achieving. Intuitive eating is working for me and I love that I don’t have to cut out entire categories of food.

I have more energy, my hair has grown back in to the thickness before it all started to dry out/fall out from being malnourished, my eyes are brighter, I can kneel on the ground without pain, I can sit without my butt being so bony it causes pain, I can have conversations with people and I remember more details of my life – all because I’m feeding myself enough to allow my body to function properly! It’s kind of disturbing to me that there are big gaps in my memory as I had years that I kind of existed in a fog, my body didn’t have the power to create memories, it was struggling just to keep my heart beating.

If you are struggling with an eating disorder or think you might be, please get help. I know, it’s terrifying. Calling a treatment center was probably one of the scariest things I’ve done in my life. I thought for sure I was too “old” to enter treatment at the age of 30, but I wasn’t the only person in that age bracket. I’ve been in eating disorder therapy groups with people in their teens to their 50’s. There have been men and women in the groups. There’s no discrimination from ED. I was terrified about gaining back weight, I didn’t want to scale back the amount of exercise I was doing. But I knew that I wasn’t happy, healthy and life didn’t feel like it had any hope. So I figured I would give it a try and I could always “go back” to ED if I wanted. Well… I don’t want to. I really really honestly truly 100% do not want to go back to that. I like feeling energetic enough to bounce around the house while playing with a toddler. I like eating a giant salad… and I like eating a handful of peanut M&M’s (which I do pretty much every single day!) And I like having some of my curves back.

If someone you love is struggling, it’s definitely scary and the best thing you can do is just love them. I don’t know that you can force someone to get help if they’re not open to it.  You can’t tell someone “just eat” or “don’t purge” or “stop overeating” because it’s not that simple. And those types of statements will just piss them off or frustrate them; and you will probably say something wrong at times. It’s hard to watch, I understand. Hell… I kind of want to look at the old me and say “Just eat!” sometimes, but I also know that would have fortified her resolve.  But if they have spoken to you about recognizing they have troubles, even in a small way, that means they are closer to being able to make a change. Encourage and support that.

An eating disorder can destroy lives… they have the highest mortality rate of any psychiatric disorder. But in addition to destroying the afflicted’s life, they can negatively impact their entire social network. Anyone that cares about someone with an ED can be hurt by that ED – parents/siblings/spouses/partners/friends. That’s why it’s so important to get help.

Because life gets better without ED. Or at least, when ED isn’t as strong. Hopefully my life will be completely ED-free someday. 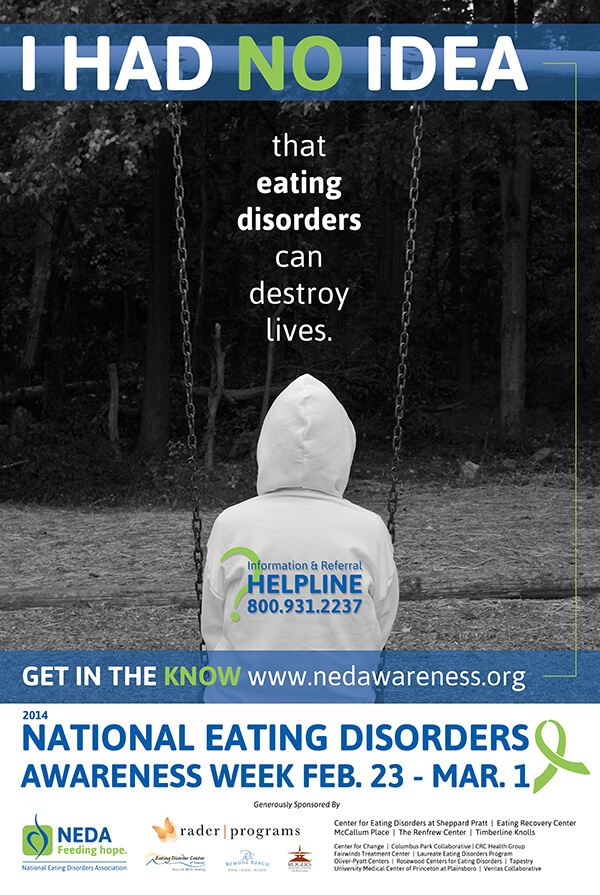