First of all…. my mom is getting married today! Alexis and I are attending the festivities! Congratulations Momm-O!

I have a half-marathon itch… I really want to train for and run another one. It’s been nearly a year since my last one! As much as I’d love to escape to Jamaica to run, I don’t think I’m going to be 13.1-ready by March 7-9. (I’m pretty sure I could suffer through the distance, but I’d rather finish feeling good; which is pretty much always one of my race goals: Finish Feeling Good.) I am kind of intrigued by the Mustang 50th Anniversary Half here in Vegas in April. It’s on a Saturday though, so my husband will be working (CPA – January to May is his busy season) and I don’t want to even think about attempting to run a half with a stroller. (Yeah yeah yeah… I know people do it. I’m not one of them!)

I think I’m going to run the race Strip on the Strip… with the toddler in the stroller. Hopefully nobody is doing anything too risque!

The Jackpot Ultra Running Festival sounds kind of fun. But it’s tomorrow and I won’t be here to do it… and it falls during busy season so even if I was home I couldn’t do it. But it sounds fun to signup for the 6-hour event.

I’m really loving these capris from Janji lately. I’ve also been loving our very mild winter that hasn’t necessitated tights much, but when the temps have cooled enough, these are fabulous! 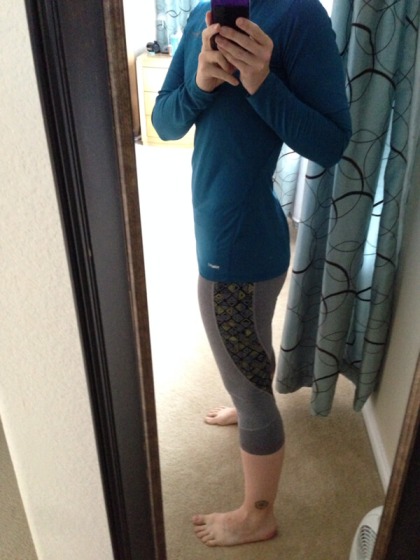 Recently I read the book Getting to 50/50: How Working Parents Can Have It All

. There were some good points in it, but it also succeeded in pissing me off. It’s written very much toward women. So we’re looking at a scenario where women are already doing more of the work (are there any studies that show men doing more when parents both work?) and now the woman is supposed to be getting her husband to do his share based on what she read in this book. I had hoped that it would be a little more toward men and women equally. I feel like I could write a whole long post on this, but it would probably end up pretty rambling and incoherent as I got fired up! My takeaway from the book was: “50/50 = not likely.”

Some of my favorite songs of the moment: Do I Wanna Know?

, Dance with Me Tonight

What are your favorite TV shows or songs of the moment? Training for anything?