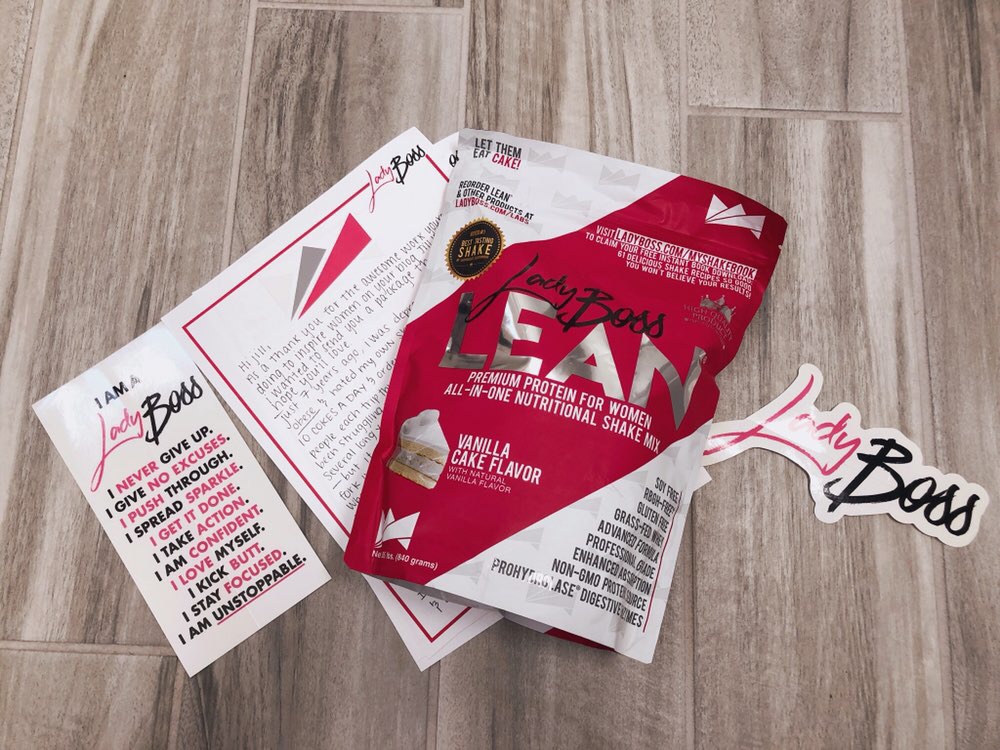 Recently I received a package from LadyBoss. In it there was a package of protein powder, some stickers, and a lovely letter from the CEO explaining why she started the company.

First of all… LadyBoss is a company dedicated to helping women lose weight and learn to love themselves at the same time. I don’t need to lose weight and I often don’t condone businesses that are built around weight loss because most of the time I feel like they are based upon feeding the self-hatred that is rampant in our society. But LadyBoss feels different, so I was open to learning more.

The founder, Kaelin Tuell Poulin, strives to give back more for free than other businesses do. Because of this, they have several free items available via their website. These include a book, an audiobook, a 7-day plan, shake recipes, etc.

They have a line of various supplements that have come from their labs and they sent me a bag of their LadyBoss Lean protein powder. This is a nutritional meal shake base, which concerned me at first because it’s just 100 calories per serving. That’s not enough for a meal! But they also say on their website to add other ingredients like fruit, veggies, peanut butter, etc. to make a filling and healthy meal, or you can use it for snacks or post-workout recovery. I can support that.

I was a little sad to see it is whey protein, which usually makes my gut angry. But I also noticed it specifically mentions digestive health. They do have specially formulated digestive enzymes included in the mix to help avoid the discomforts that can come with other protein-based foods. That gave me a little more inclination to try it. Plus, it’s VANILLA CAKE FLAVOR! That just screams yummy to me.

The smell of the powder wasn’t as exciting as I hoped upon opening the bag. But the flavor is pretty good, especially when it’s used as an accent mixed with other ingredients.

I made my husband taste it too. He said he didn’t feel emasculated drinking something called LadyBoss. 😉 He didn’t care for the flavor on it’s own, he said it “wasn’t bad, but it wasn’t good either.” But once he tried it mixed with other stuff he found it more palatable.

Can we talk about the name “LadyBoss” a little? I’m on the fence here… I get there is a side of this that is supposed to be empowering. But there’s a part of me that reminds me of the more demeaning habit some people have of referring to women in professional jobs by adding the word “lady” in front of it. Like “Lady Doctor” or something like that. Also, I have employees and I think I’d be weirded out if they referred to me as their “lady boss”.

But the underlying message of it all is very motivational and encouraging and empowering. You can feel the love and hope in the letter I received, it doesn’t feel like a big faceless corporation.

They have other products that I wouldn’t mind trying. A pre-workout called FUEL and and a post-workout drink called RECOVER. Appropriately named, huh? Both of those are in a Watermelon Candy flavor, which sounds good to me!