I Love Running, I Hate Running

It’s 4:30 am, my alarm is going off after I didn’t fall asleep until about 1am and my child woke me up several times during the night.
I hate running.

Crossing the finish line of a race, PR or not, and feeling like you’ve really accomplished something.
I love running.

There are so many miles on the training schedule and it just doesn’t fit into the week with all of your duties and expectations no matter how hard you try to work it.
I hate running.

Running is cheaper than therapy.
I love running.

My state of mental and emotional exhaustion is affecting my physical state, so running really just brings it all down more.
I hate running.

Lately, I feel like I have a real love-hate relationship with running. I still like to run and I love the feeling I have after I’ve completed a good run. Hell, I even like it after a slightly bad run. I really really do not like the feeling of an absolutely awful run. And I’ve had a lot more of those “absolutely awful” runs over the past year than I ever thought possible.

Once upon a time running was easy. Not easy in the sense that I was a great, gifted runner and could knock out huge miles with little to no effort. I just meant that running was fun and I could roll out of bed and head out for some miles before getting on with my day without worry.

Over the past few years, my life has gotten infinitely more stressful. I can blame being a mother, but there are millions of women who are mothers out there and they can function just fine. I can blame increasing job responsibilities, but there are plenty of people (even of those I work with) who manage a lot more than I do. I can blame health troubles that seem to be building, but there are people with much worse conditions than I am dealing with.

The issue is me… I’m not coping with the demands of life as well as I used to be able to. Basically, I feel like I’m on an emotional roller coaster.

So how does running factor into this? A lot of people talk about how they use running as a stress reliever. I used to do that myself. Seven or eight years ago, when something was really bothering me at work I used to go run the one-mile loop around my neighborhood to blow off steam or sort out my thoughts. Even when I went into the office each day, I would go walk around outside if something was particularly troublesome or answers were eluding me. Movement is good for you, physically, emotionally, mentally… usually.

But getting up early to run feels harder physically because I don’t remember feeling this tired in my whole entire life. Even when my daughter was a newborn baby and I slept in sporadic fits throughout the night around feedings, I wasn’t as tired as I feel most days now. And when I do wake up early to run, my daughter inevitably hears me and starts calling out to me as I try to slip out. So I feel guilty if I try to slip out and leave her dad to deal with it or I feel guilty for skipping my run to settle her down.

Plus some of the health troubles I’ve had make morning running just feel harder. I honestly feel like I’m a better runner after I’ve been awake for at least 4 hours. Which means I then have to run for my lunch hour. And then I feel guilty for actually taking my lunch hour because inevitably people are messaging me during needing things. And since I telecommute, I don’t want to be perceived as being absent.

I still have running goals and dreams, but I keep pushing them further and further to the back of my mind as they feel less and less possible. Earlier this year, I was certain I was going to run a half marathon in August and one in September. Guess what? I didn’t run the August one and I’m not registered for the September one (nor trained for it.) Then I think I’ll sign up for some local races in October or November, the weather is better in those months anyway. (I’m in Las Vegas, summer months are always the worst for training for me.) But I also feel like my life is in upheaval so I can’t make plans for myself once again.

And maybe it’s just feeling like I’m judged because of runs being posted and shared on social media. I switch my Strava account on/off all the time because I don’t want to feel watched in that regard. That may seem strange from a person who is emoting all over a blog and has been publishing a blog since 2001. But I’m also probably overly sensitive in assuming that a) people look at my distance/pace and question my legitimacy or b) they’ll look at my elevation/effort and judge the moments I had to walk because I felt awful or c) people might feel bad if they compare they own efforts against mine. For some reason, I am the gatekeeper of everybody’s feelings? It’s that people-pleasing tendency they tried to beat out of me in therapy. (No beating every occurred in therapy.)

Maybe I just need to redefine my relationship with running.

So tell me… do you have love/hate moments with running and what brings on those feelings? 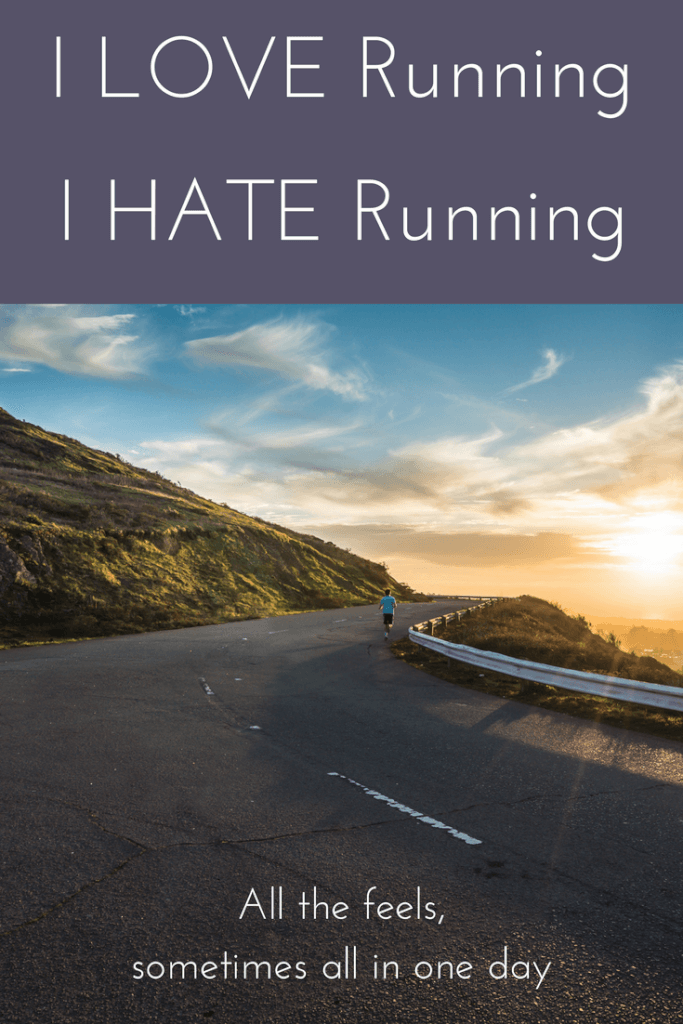